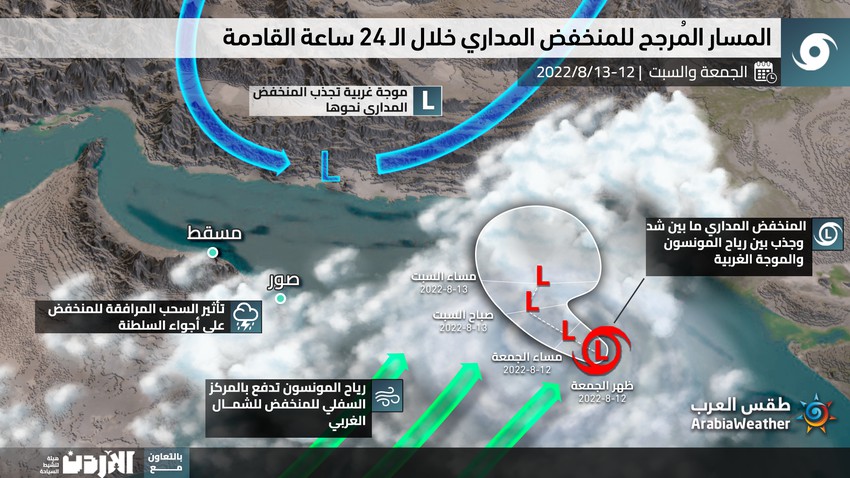 Arab Weather - Specialists in the Weather Operations Department at the Arab Regional Center for Meteorology and Weather Forecasts reported that the tropical depression centered in the northeast of the Arabian Sea will move to the west and northwest during the next 18 hours. The specialists added that the latest developments and information of this air depression are being monitored in real time via satellite and computer simulation models, and periodic updates will be made about the air depression.

Where it is evident from the latest information and analyzed and received data that the tropical depression is located to the northeast of the Arabian Sea, and the surface wind speed around the center is estimated at about 17-27 knots, and is centered on latitude 23 degrees north and longitude 65 degrees east, and the center is far from the coast of Sultanate (Ras Al Hadd) is about 550 km.

According to the future computer simulation of the movement of this depression, which is running inside the Arab Regional Weather Center, it is expected to move to the west / northwest during the next 18 hours, and some cumulus clouds accompanying the depression may succeed in affecting parts of my governorates on Saturday 8/13/2022. North and South Al Sharqiya. It is feared that torrential rains will form and run quickly, especially in coastal areas, valleys and reefs in some areas of these two governorates, with the possibility of some rainy clouds extending to separate parts of the governorates of Muscat, Al Dakhiliyah and Al Wusta, especially the mountainous highlands.

The specialists in operations management at the "Arab Weather" Center periodically review (around the clock) the outputs and analyzes of the weather readings and issue updates if necessary.