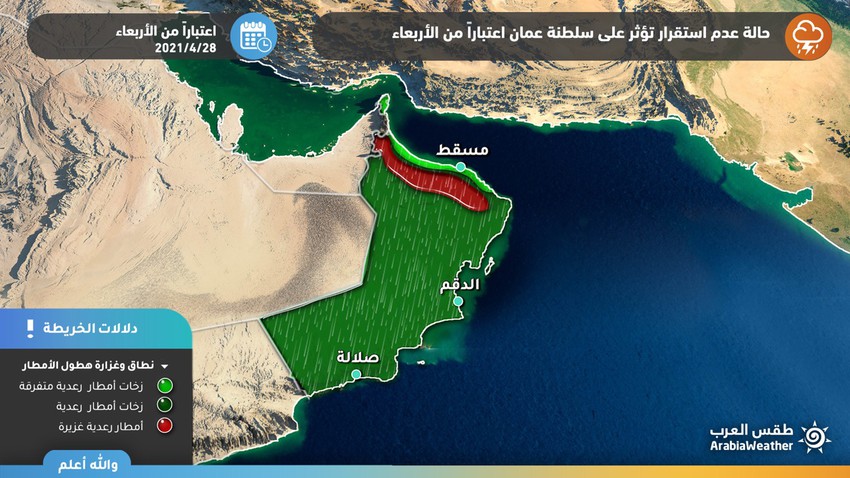 Arab Weather - Our indications in Arab weather are increasing that large parts of the Sultanate are affected by a rainy state, characterized by strength and comprehensiveness in the area of influence, accompanied after the will of God by heavy thunderstorms and hail, in addition to the presence of a high possibility of torrential formation in some areas.

The Sultanate is affected by local formations of cumulus rain clouds starting from the afternoon of Tuesday on different parts of the Hajar mountain range , as a result of the mountainous nature that increases the strength of cumulus clouds, as heavy showers of rain fall accompanied by hail.

On Thursday , the effect of the surface depression, which is centered in southern Arabia, increases, as it pushes very humid and warm winds across the Arabian Sea towards the Sultanate, in conjunction with the flow of cooler air currents towards the region.

This would increase the severity of the weather and intensify the abundance of rain, starting from the west of the Sultanate, an extension of most regions, and the thunder clouds are strong and dense sometimes and the severity of the condition becomes above average with some heavy foci sometimes in parts of Dhofar, Al Dhahirah, Al Dakhiliyah and Al Wusta.

As for the capital, Muscat, it will be the best chance of rain in the afternoon hours and continue until the evening hours, as it is expected that cumulonimbus clouds will form accompanied by local showers of rain, ranging between light and medium, accompanied by lightning and thunder and activity of surface winds.

These rains are accompanied by strong winds resulting from cumulonimbus clouds, which are called descending winds, which stir up dust and dust, and thus a high chance of a decrease in the horizontal visibility due to the dust.

A gradual decline in the weather on Friday

It is expected that the effects of unstable weather conditions will begin to diminish on Friday , with the opportunity remaining ready for sporadic showers of rain in different parts of the Sultanate that may affect parts of the capital, Muscat, so that the quantities of clouds gradually decrease and the chances of precipitation weaken.

- Alert of the formation of floods locally in parts of the Sultanate.

It is advised not to go to the sea or practice marine activities because of its severe turbulence and the high waves along the coast of the Sultanate.