Sunday | Significant changes to the weather and a number of alerts 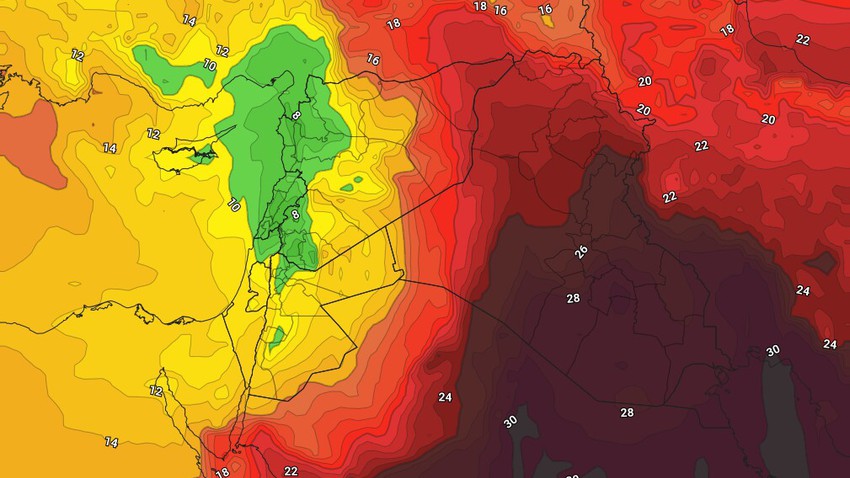 Weather of Arabia - God willing, the Kingdom is expected to be affected on Sunday by a nice air mass coming from the Mediterranean Sea, so there will be a significant drop in temperatures to return and become their lowest rates for this time of the year, and the weather will be moderate during the afternoon and afternoon hours in various regions of the Kingdom, While it is relatively hot in the Jordan Valley, the Dead Sea and the city of Aqaba, in addition to the Badia regions, with the appearance of clouds at different altitudes, and local showers of rain are likely in limited parts of the Kingdom for a limited period.

Maximum temperatures are in the twenties in the major cities, including the capital Amman, while they are around the thirties in the Jordan Valley and the Dead Sea in the city of Aqaba and parts of the Badia.

The winds are westerly moderate in speed, gradually active during the day and are accompanied by strong gusts, especially in the afternoon and afternoon hours, working to raise dust and dust in the desert areas and may lead to the formation of dust waves.

There is a significant decrease in night temperatures compared to the previous nights, and the weather is relatively cold at late night hours and early morning in various regions of the Kingdom, and cold over the southern mountainous heights, which requires wearing a light coat.

Surface humidity levels gradually rise, and the weather becomes humid with the appearance of low amounts of clouds, which may lead to the formation of fog over some mountainous heights at late times of the night, and there is a possibility of local showers of rain in parts of the far north of the Kingdom at dawn and Monday morning.

Winds will be westerly moderate in speed, energizing at times and causing dust in the south and east of the Kingdom.