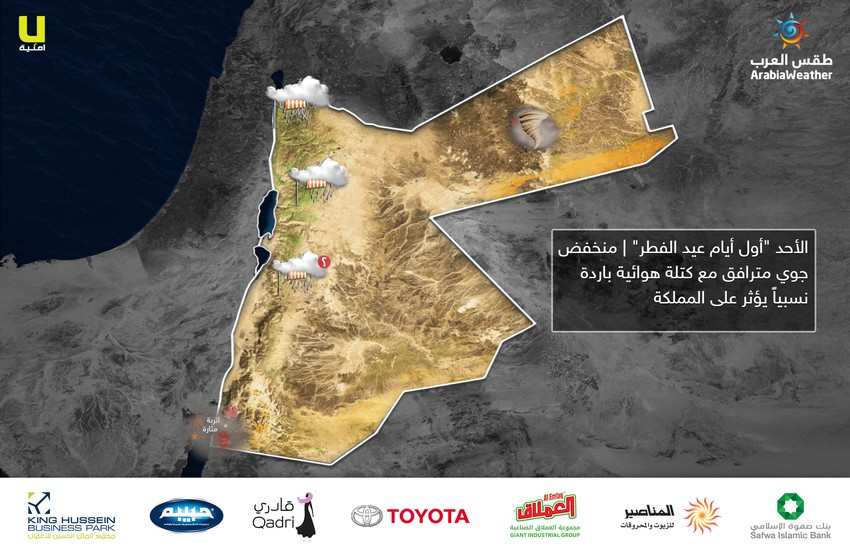 Arab Weather - The Kingdom is expected to be affected on Sunday, "the first day of Eid Al Fitr", with an air depression in all layers of air centered in northern Syria and accompanied by a cold air mass that is not used to rushing to the region at this time of the year.

Where there is a further decrease in temperatures, and heat falls below its general rates of approximately 10 degrees Celsius.

Showers of rain are expected in the northern regions, some central regions and possibly the Karak Heights, which may be accompanied by thunder sometimes .

The depression is also accompanied by wind activity accompanied by donations of up to 85 km / hour in the southern highlands and desert areas, which raises dust and dust, with sand storms expected in the eastern and southern desert .

With the hours of the night, the depression is expected to move away from the kingdom, and the weather will be generally cold, with the appearance of low clouds.

While the chances of rain significantly weaken in various regions and the wind speed gradually decreases with its active speed at intervals.

The Weather of Arabia recommends that:

Wednesday Mild summer weather during the day and cold at night ...

Wednesday The effect of the low-pentagonal effect ends ... and temperatures are below average

May 2020 - the month of unusual weather events