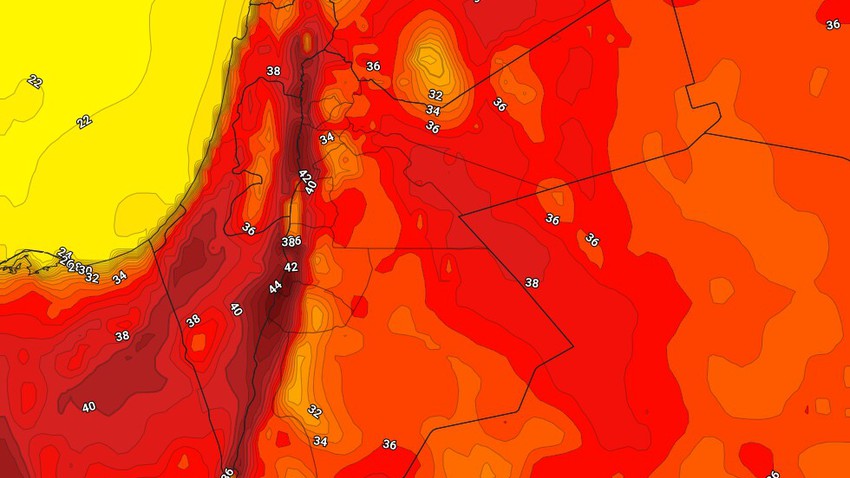 Arab Weather - "God willing," it is expected that the hot air mass will reach its climax in affecting the Kingdom's atmosphere on Sunday, so that there will be more rise in temperatures and are several degrees higher than their normal rates for this time of the year, and the weather is generally hot, and severe The temperature in the Jordan Valley, the Dead Sea and Aqaba, so that the temperatures are forty in those areas, coinciding with the emergence of quantities of clouds at medium and high altitudes and there is a possibility of thunderstorms of rain during the afternoon hours in random and dispersed areas concentrated in the eastern desert and are actively accompanied by the speed of the dramatic surface winds For dust and dirt.

The winds will be southwesterly, light to moderate, turning to westerly moderate, active sometimes during afternoon hours.

Night temperatures remain high, and the weather continues to be warm in all regions of the Kingdom, and clouds continue to appear at medium and high altitudes, so that the possibility remains for showers of rain in limited and random parts, and the winds are light to moderate westerly, and may activate sometimes in some areas.

⚠️ Recommendations
1- Drink sufficient quantities of fluids between Maghrib and the pre-dawn meal.
2- Not to be exposed to sunlight for long periods, especially in the Jordan Valley and Dead Sea areas.
3- Not to leave children inside closed vehicles under the sun's rays.
4- Avoid placing pressurized and flammable containers inside vehicles, to avoid the risk of ignition.
5- Be aware of the danger of slipping on the roads that witness rain.