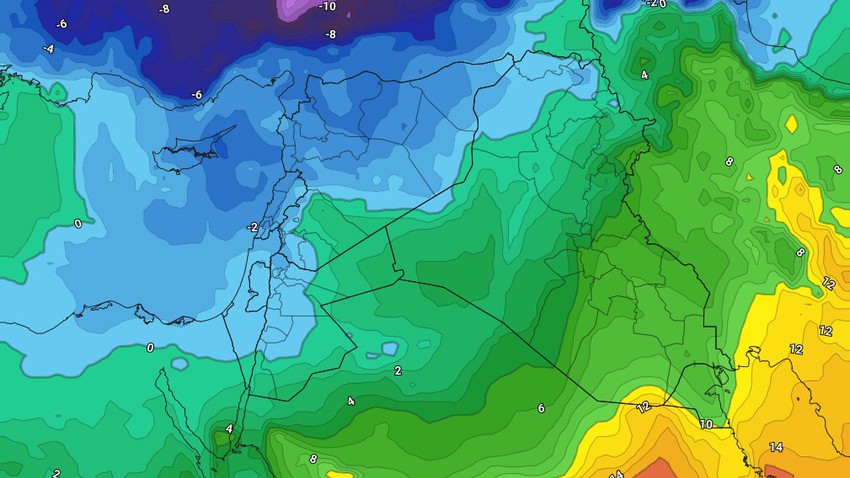 Weather of Arabia - Syria is affected by a highly effective air depression associated with a very cold air mass of polar origin, where heavy thunderstorms fall during the hours of Monday / Tuesday night at the beginning and extend towards the rest of the regions during the day on Tuesday and continue until Wednesday evening all over the country, and the rain is heavy And it is affected by thunderstorms and showers of hail, especially in the coastal areas, which cause the formation of torrents and the rise of water levels in the roads.

Snow also falls between Wednesday and Thursday over the high mountain heights of more than 900 meters in the north, center and south of the country, and it is expected to accumulate over those areas, and this coincides with the blowing of fast winds accompanied by strong gusts on the coasts, which leads to a remarkable rise in the waves on the beaches.

The country is increasingly affected by the cold and dry polar winds that rush behind the depression, which will end its effect on Wednesday evening, which leads to a drop in temperatures on Wednesday / Thursday night and a large-scale formation of frost and ice, and forecasts of ice and frost include large areas of the Levant desert, in addition to the northern highlands And the central and southern regions, including the heights of the capital, Damascus, as temperatures drop below zero degrees Celsius in those areas.

2- Safe use of heating media.

3- Pay attention to the danger of flooding, rising water levels, and sea turbulence on the beaches.