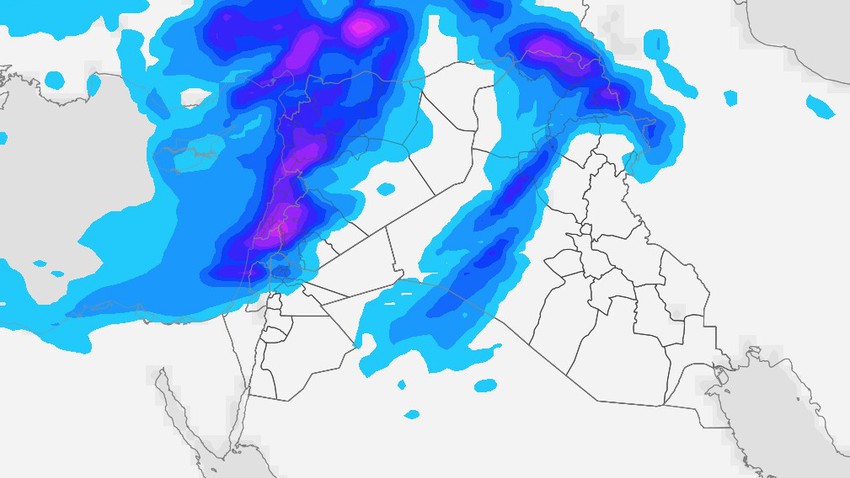 Arab Weather - The temperatures decrease on Wednesday and the weather is relatively prevalent in the mountainous heights, and it is warm in the rest of the regions, but as of the evening hours there is a further decrease in temperatures, and showers of rain start from the far north of the country, and extend at night hours towards the central regions And the southern, in addition to parts of the eastern regions, and the rains of varying intensity, and sometimes foul, especially in the coastal areas.

The air depression reaches its climax on Thursday evening and heavy rain is expected!

The temperatures decrease further on Thursday with the continued showers of rain in some areas, but as of the afternoon and evening hours, the crossing of the depression begins and with it the peak of the weather activity begins, where the rains become abundant starting from the northern regions, quickly extending towards the rest of the regions, including in This is the capital, Damascus, with a warning of the danger of torrential floods and a rise in water levels on the roads, especially in coastal areas.

Strong wind gusts in some areas, causing waves to rise on the beaches!

The air depression is accompanied by strong southwesterly winds, which are active in speed and are accompanied by strong gusts, especially in the desert and coastal areas, which cause dust and dirt to rise in the Levant desert, and a large and clear rise of waves and their turbulence on the beaches.

It is also expected that snow will fall in high intensity along Jabal al-Sheikh in the southwest of the country, God willing, with renewed warnings of the need to pay attention to the danger of floods forming, especially during the evening hours of Thursday.