Syria and Lebanon | An expected gradual drop in temperatures ... and a cold air mass accompanying an air depression on Saturday 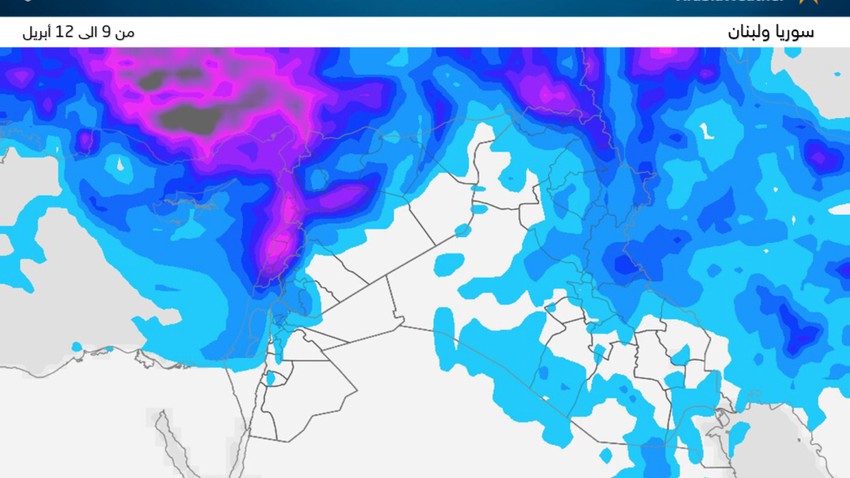 Arab Weather - Muhammad Aouina - The latest weather map readings in ArabiaWeather indicate that there are clear changes in the distribution of air masses in the northern hemisphere in the coming days, as temperatures are expected to decrease significantly, and the chances of rain are renewed in some areas, this comes as a result The push of a cold air mass from the east of the European continent towards the eastern Mediterranean and the Levant, which will have a clearer impact on Lebanon and western Syria.

Starting from the night of Thursday / Friday, the area is gradually approaching a cold air mass that brings a successive decrease in temperatures, so that the humidity levels are remarkably high in all regions, and quantities of clouds appear at high altitudes.

On Friday, there is a significant drop in temperatures, and quantities of low and medium clouds interspersed with dispersed showers of rain are rapidly and limited in Lebanon and the coasts of Syria, and the winds will be westerly to southwest, with brisk speed.

During the night hours, the weather is generally cold, but it turns very cold at dawn, with a generally weak chance for showers of rain in the coastal areas.

The actual effect of the depression on Saturday morning

The actual effect of the depression is expected to begin on Saturday, as the temperatures decrease significantly, and the weather will be cold in various regions, and the rains begin with the morning hours in Lebanon and the coastal areas of Syria, and with the hours of the day and as a result of the movement of the air depression towards Turkish lands, the air effectiveness increases This includes parts of the northwestern and southern regions of Syria, including the capital, Damascus, and the rains are generally light and may intensify to become moderate in limited ranges, while they are in the form of snow showers over elevations above 1300 meters above sea level, and westerly winds also blow To the southwesterly, active to strong speed.

On Sunday, there will be a rise in temperatures, with the weather remaining cold in all regions, and rain falls at intervals in Lebanon and the western strip of Syria, and it forms snow on mountains that are more than 1,400 meters above sea level.

The depression receded on Monday evening

It is expected that the country will continue to be affected during Monday hours by the depression and the associated air mass, which leads to local formations of cumulus rain clouds in some areas, especially the northern ones, where sporadic showers of rain fall, and this activity recedes on Monday afternoon and evening, and the winds decrease and become variable Direction and moderate speed, but it is active occasionally in some areas, and the weather turns to become cold to very cold in all regions.

As a result of the cold air mass rushing towards the country, an active speed southwest wind blows on Saturday, with gusts of 80 km / hour, and it is expected that these fierce winds will cause strong turbulence in the water so that the height of the waves in the interior may reach four meters, at a rate of 2-3 meters on the coast of Syria and Lebanon.