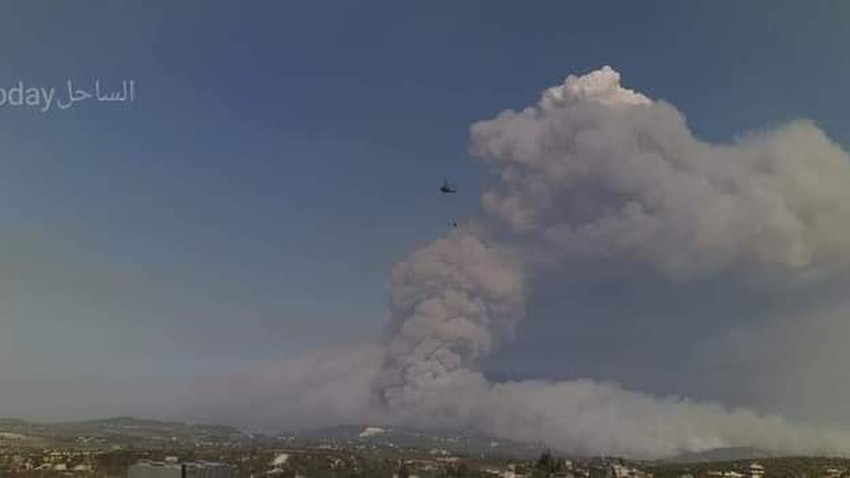 Arab Weather - Numerous fires broke out in the mountains of the Syrian coast due to severe drought, eastern winds, high temperatures and lack of rain that contributed to their outbreak this morning

The satellite image shows smoke emanating from the mountains of the Syrian coast and the huge and large fire in the Belloran forest area, the Qandil Valley and Al-Basit, in addition to smoke clouds crossing the coastal sky from the Kafroun and Mushta al-Helou area fire and fires in the western countryside of Homs and the Akkar region in Lebanon. And a huge fire near the city of Iskenderun, which entered homes there, and the smoke covers large areas and appears even from outer space.

The image was shortly before the Terra Modis satellite.

The Syrian Coast Weather page on Facebook also reported that the expected cause resulting from the fire is the cigarette butts thrown from cars may be the only possible cause now.

And the electrical current was cut off in general on most of the coastal villages for the fires caused by the collision of the escape cables with the strong eastern winds, however the smoke of the fires is rising from all directions, even from the plain agricultural logic!

A picture of Mashta Al-Helou, before and after those affected by the wildfires

The fires are still spreading widely and widely, with the continued blowing of the winds, which energize the fire and extend it further.

The fires are continuous and widespread, and the fires there are of a larger area than the Jordanian capital, Amman.

Some pictures of the fires