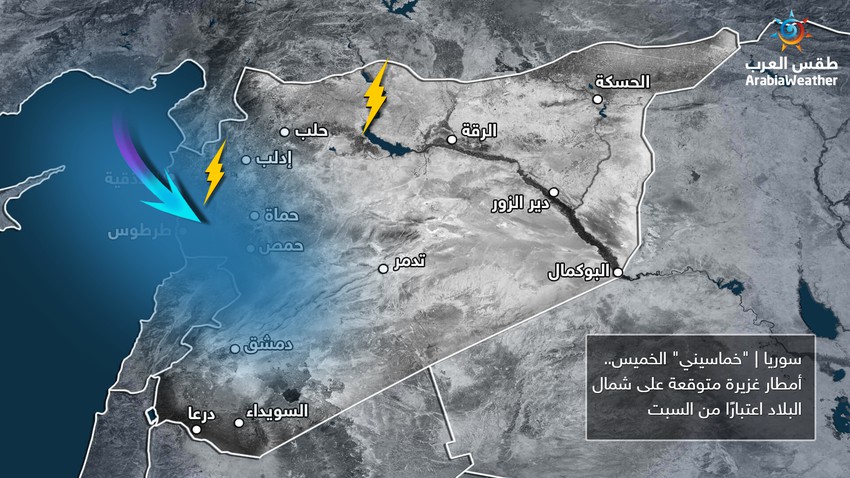 Syria `Khamasini` Thursday .. Heavy rain expected in the north of the country, starting from Saturday

Weather of Arabia - Syria is expected to be affected by the Khamsini depression Thursday evening and Friday morning, as the opportunity is given for separate thunderstorm showers from the rain, God willing, in separate areas that are muddy due to the high concentration of dust in the air.

Temperatures also decrease significantly in the area on Friday evening, as this depression of the pentathlon depression subsides.

Temperatures below average as of Saturday

Syria is affected by a cold air mass accompanying a new air depression concentrated inside Turkish territory, from Saturday to Monday, accompanied by a decrease in temperature to be lower than its rates for this time of year, with activity in the wind and rain.

And the areas of the Syrian coast and the north of the Syrian lands are witnessing a heavy rainfall, accompanied by torrential rain, God willing, with torrential rains in the valleys and lowlands. While the effect is less in the interior, where the effect is limited to separate showers of rain with great coldness, relative to this time of year, and activity in the dramatic winds of the soil in the desert.

Syria Expectable rain to the north on Monday ... and a low on Thursday

Iraq and the Levant Showers Monday and Thursday morning