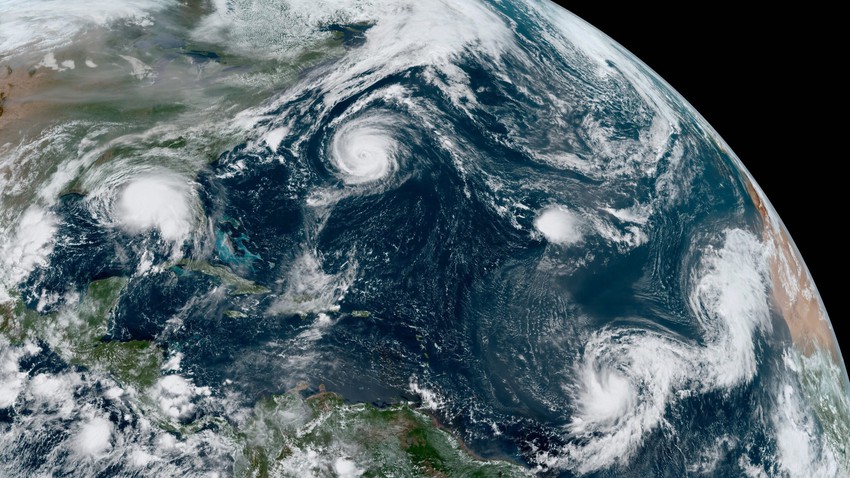 Weather of Arabia - When Tropical Storm "Wilfred" formed on September 18 in the Atlantic Ocean, the National Hurricane Center exhausted the list of storm names for the second time since the naming of hurricanes began in 1950. Within hours, two more "alpha and beta" storms formed.

Even more surprising, this year's 23rd Tropical Storm "Beta" formed about a month earlier than in 2005, the only other year to record so many so-called storms.

The Atlantic hurricane season for 2020 is not over yet. With the formation of new storms, forecasters have switched from the alphabetical list of people's names to the letters of the Greek alphabet, in a case similar to the 2005 season, which witnessed six storms of Greek letters, ending with "zeta".

So why is the Atlantic Ocean so active this year? "Meteorologists have been following some important differences, including the many tropical storms that formed near the American coast," says the author of the article, assistant professor of meteorology at Mississippi State University, author Kimberly Wood.

What is the reason for the large number of tropical cyclones in the Atlantic Ocean?

When there is turbulence - a large mass of convective clouds or thunderstorms - over the Atlantic Ocean, some weather conditions will help it grow into a tropical cyclone.

Warm water and plenty of moisture help the turbulence gain strength. Besides slow shear winds, which means that wind speeds and directions do not change much as they rise in the atmosphere, and this is important because these winds can prevent convection from growing. The instability enables air parcels to rise higher and continue to create thunderstorms.

This year, sea surface temperatures have been above average across much of the Atlantic and shear winds have been below average. This means that it was more suitable than usual for tropical cyclones.

La Niña may also have something to do with it (La Niña is the opposite of El Niño - it occurs when sea surface temperatures in the eastern and central Pacific are below average). This cooling is affecting weather patterns across the United States and elsewhere, including weakening shear winds in the Atlantic basin.

And NOAA decided in early September that we were entering the La Niña climate pattern. This pattern has been building up for weeks, so these common conditions could have contributed to the Atlantic Ocean's suitability for tropical cyclones this year.

An unusual bend off the American coast

Four hurricanes struck the US coast this year - Hanna, Isaias, Laura and Sally, which is more than usual at this point in the hurricane season. But we also observed several short-lived tropical storms that had less impact.

When a tropical cyclone develops turbulence forming over Africa, it has plenty of ocean in front of it with room to organize and gain strength. But this year, several storms have formed farther north, closer to the American coast.

Most of these hurricanes came from disturbances that were not very promising - until they moved over the Gulf Stream . It is a large ocean current that carries warm water from the Gulf of Mexico to the upper east coast and the North Atlantic Ocean.

Since these tropical storms were already too far to the north, they did not have much time to gain strength. Meteorologists have yet to study why so many storms form this way this season, but it is likely due to the Atlantic waters warmer than usual and the location of the Gulf Stream.

Hurricane season 2020 is a record-breaking season

The 2005 season saw 28 named storms form. The list of names for tropical cyclones in the Atlantic skips letters that are difficult to find easy to distinguish names, such as Q and Z , and then move to the Greek alphabet.

During the 2020 season, the numbers were also broken, as the American alphabet was exhausted to move to the Greek alphabet, so can the Greek names run out before the end of the hurricane season on November 30?