The annular eclipse of the sun ... How does it happen? What is the difference between it and the total or partial eclipse? 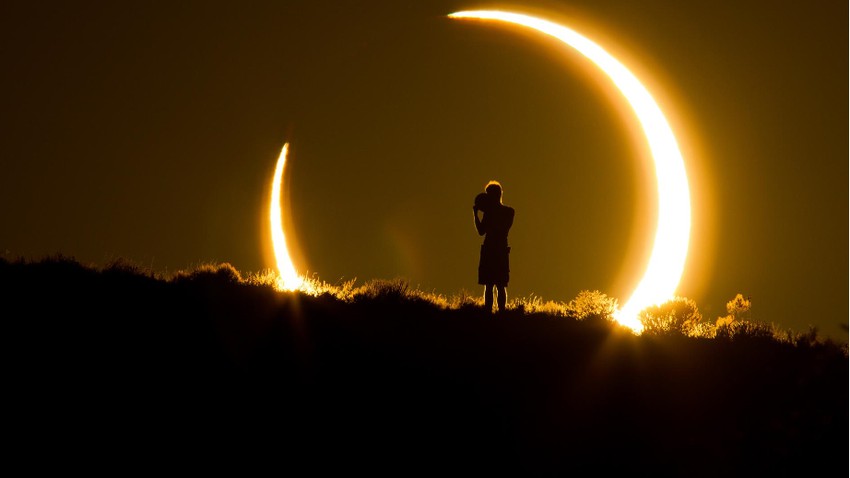 Arab weather - Sinan Khalaf - annular eclipse , a rare astronomical event that is considered the most prominent and important for the Arabian Peninsula for decades, it is expected that the sky of the Arab Gulf region will witness the phenomenon of the annular eclipse of the sun on December 26th, where the sun will shine on the Arab Gulf states either in the case of an eclipse Partial or annular eclipse, in a phenomenon that the region has not seen for 118 years.

Annular eclipse ... How does it happen? What is the difference between it and the total or partial and hybrid eclipse?

To answer this question, we must first of all clarify how the eclipse occurred in general. An eclipse is an astronomical phenomenon that occurs if the Earth, the moon, and the sun exist on one straight line, so that the moon passes between the Earth and the sun, preventing the sun’s rays from reaching the earth either in whole or in part. , In an astronomical phenomenon known as the Eclipse .

An eclipse can be divided into four types:

Partial eclipse of the sun

The partial eclipse of the sun occurs when the earth, moon, and sun are aligned on a straight line, and the moon begins to pass in front of the sun, blocking its rays from the earth, but the moon’s shadow is far too small to cover the entire Earth, and so what happens to most people on Earth is that they fall in the shadow of the partial moon, Where the moon can only block a small part of the sun's rays from them, and this is called a partial eclipse, and a partial eclipse may mask a quarter of the sun’s disk, or half of it, or any part of it less than full, and may last for several hours.

The total eclipse of the sun

In the small spot of the Earth’s surface that lies in the full moon’s shadow, a total eclipse occurs. During this eclipse, the moon’s disk passes completely in front of the sun’s disk, and then the whole sky will darken as if it was time at night, and the solar halo, the outer atmosphere of the sun, will appear. This eclipse lasts for less than five minutes, after which it returns a diminishing partial eclipse until the moon completes its crossing from in front of the sun

Annular eclipse of the sun

The annular eclipse is an astronomically similar phenomenon to the total eclipse, but with a small difference, when the annular eclipse occurs, the moon is farther from the earth than usual, or the Earth is closer to the sun than the habit, or both, and thus the sun appears slightly larger than its usual size, while it appears The moon is a little smaller. Thus, when the moon disk crosses in front of the sun, it cannot completely block it, even though it is located exactly in front of it, but a ring of its rays remains around it, and from here the name of the annular eclipse came, and the duration of the total eclipse lasts approximately.

Hybrid Eclipse The hybrid solar eclipse is called the total annular eclipse, which occurs when the moon is within an area close enough to reach its shadow to Earth, and the hybrid eclipse usually begins as a annular eclipse, then completed to become total.