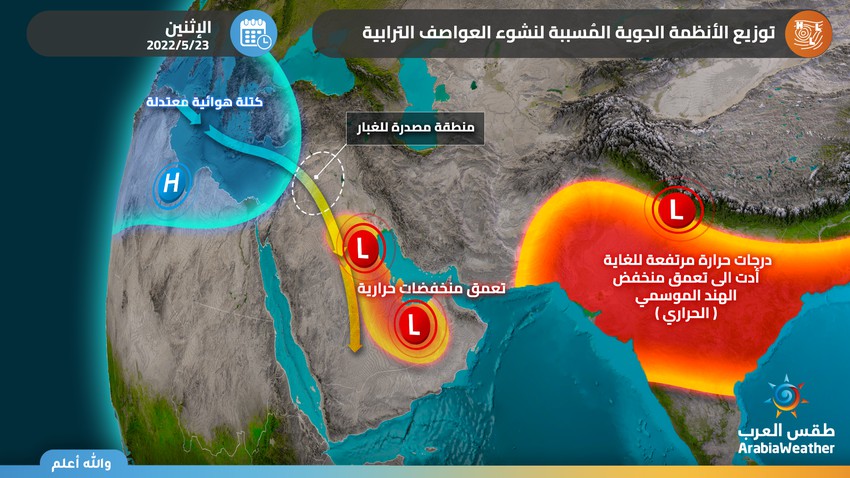 Arab Weather - The Arab Regional Weather Center has issued a comprehensive report to monitor the dust waves and dust storms that have recently affected the Arabian Peninsula. In this study, we stand on the scientific reasons that led to the formation of these weather conditions from several axes, whether studying the general pattern of the atmosphere “Synoptic systems” or the impact of various environmental factors, and the extent to which the frequency of dust storms is related to climate change, and the correlation coefficient between dust storms and climatic phenomena is wide. the range.

It is noteworthy that many parts of the Arab Mashreq have been affected during this spring by many waves of dust and sandstorms, which are considered one of the weather phenomena that affect land and air transport in the affected areas, as well as causing health concerns.

First: Atmospheric conditions of a synoptic range are conducive to the emergence of dust storms

Sand and dust storms alike are a common weather hazard in arid and semi-arid regions such as the Arabian Peninsula, and are usually caused by thunderstorms or extreme variations in atmospheric pressure values, which cause great activity in the winds, which in turn carry large amounts of sand and dust from the barren lands. and arid, transporting them for distances ranging from hundreds to thousands of kilometers sometimes.

Dust storms develop in the Arabian Peninsula with different weather conditions throughout the year. During the winter season, the passage of the Mediterranean depressions in the north of the Arabian Peninsula is enhanced by strong northern winds that accompany the air fronts in many cases, and sometimes cause sandstorms to form in some areas. As for the summer, the great gradient in the surface atmospheric pressure between the thermal depressions that dominate the eastern Arabian Peninsula and the air highlands that arise in the eastern Mediterranean and the Levant leads to a great activity in wind speed in order to compensate for the air shortage in the area of ​​the thermal depressions, and this is a divine conditioning for the distribution of heat and cold On the face of the earth. The eastern region and parts of the central region, including the Riyadh region and the northeastern region of Saudi Arabia, are the scene of the activity of these winds, in addition to the Persian Gulf basin, where the wind activity extends to Bahrain, Qatar, Kuwait, Iraq, and the northern Sultanate of Oman in some cases. 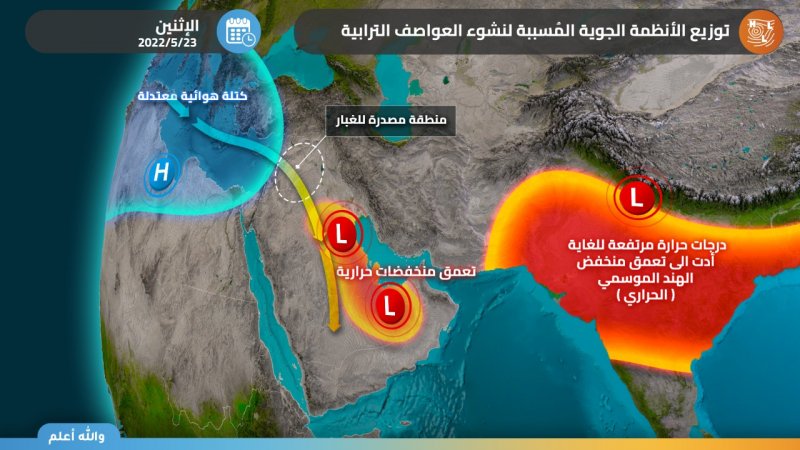 In our case, the recurring dust storms during the last period were associated with a deep depression over northern India and southeastern Arabia, coinciding with the transit of a less hot air mass over the eastern basin of the Mediterranean. This resulted in what is meteorologically known as the geopotential elevation gradient prevailing between east and west near the surface (i.e. the pressure gradient between the above-mentioned thermal depressions and the surface elevation extending to the eastern Mediterranean), and this led to a surface flow of northern winds over the Arabian Peninsula that lifted and transported large quantities of the dust. As a result, dust originates not only from local sources but also from sources in the northern regions of the Arabian Peninsula such as the Syrian desert as well as the desert regions of western and southern Iraq and the Tigris and Euphrates rivers. Moreover, local thermodynamic properties can also play an important role in Increasing intensity of dust storms.

When studying the climate bank data, dust storms form in the Arabian Peninsula throughout the year, while spring is the most frequent season for dust and dust storms, increasing in March, while peaking in May. 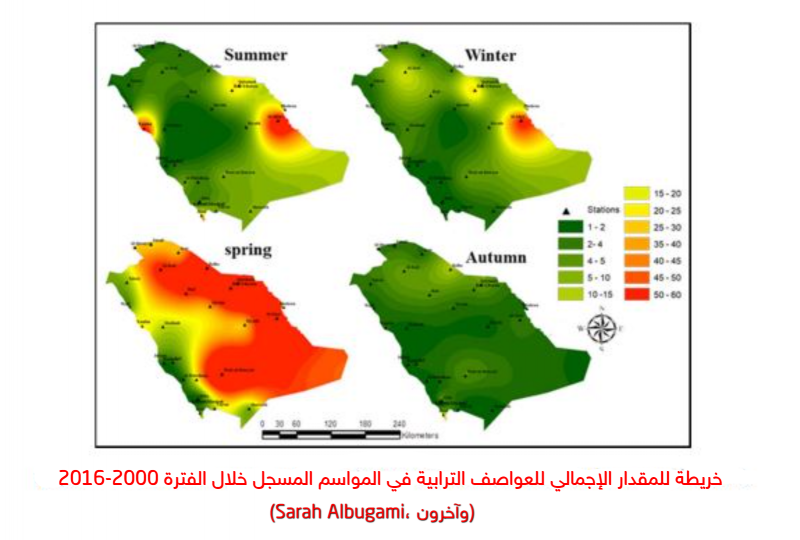 Second: high levels of drought after a weak rainy season on the Arabian Peninsula

Among the most important pillars of dust and dust storms formation are:

Specialists in Arab weather said that the lack of rain during the rainy season is a major reason for the lack of vegetation cover and the disintegration of the soil easily, and although it rained during the spring, the spring rains coincided with the hot weather, which in turn works on the speed of evaporation. These rains work on a greater soil cohesion, which reduces the ability of the wind to carry sand and thus reduces the intensity of dust storms when they start their season.

The attached map shows, recording high levels of drought, which naturally led to loose soil with small and fine grains and particles that the winds can lift and carry with ease and transfer from one place to another once the weather systems causing dust storms occur. These huge dust storms, which are usually Regional, such as the recent dust storm that formed in eastern Syria, intensified in Iraq, and then moved to most of the Gulf countries. 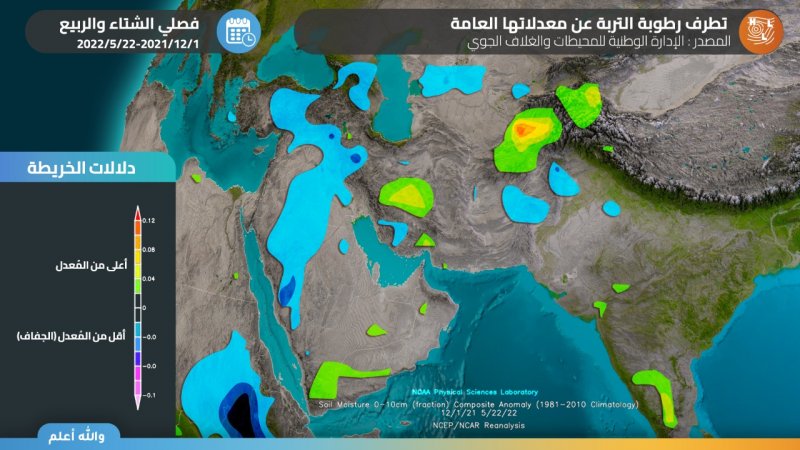 It is noteworthy that the lack of vegetation cover in terms of plants and trees, whether this lack is the result of natural causes due to lack of rain and drought, or causes resulting from human neglect and sabotage, is a major reason for the formation of this sandstorm that affected the Arabian Peninsula, as the vegetation cover plays an important role in the process of stabilizing Soil and prevent sand from flying with wind gusts, and trees, by their nature, act as natural buffers for winds and dust waves.

Third: Do Climate Changes Have an Impact?

Studies published in the World Meteorological Organization indicated that "the Middle East region has experienced a significant increase in the frequency and intensity of sand and dust storms in the last 15 or so years." A study released in February last year claimed that dust storms in the Middle East are likely to become more severe as a result of climate change, given that warmer temperatures lead to more severe droughts.

While specialists in Arab weather indicated that it cannot be proven that the recurrence of dust storms on the Arabian Peninsula during the current spring is due to climatic changes, because climate changes cannot be measured in a short period. They added that considering the occurrence of single weather events in certain regions of the world as climate change is in itself in doubt. To prove the association of these dust storms with climate changes, these storms must be repeated for a mini-climate cycle (at least for 10 years).

Regarding the association of dust storms with global phenomena such as ENSO, a statistical study showed an increase in the frequency of dust storms in the Arabian Peninsula during the La Niña years. Between 1985 and 1994, the neutral phase to La Niña dominated the ENSO cycle, and during that period the activity of total dust was significantly higher. average abnormal. In contrast, the total dust in the Arabian Peninsula decreased between 1995 and 2009, with El Nino being the dominant phenomenon. 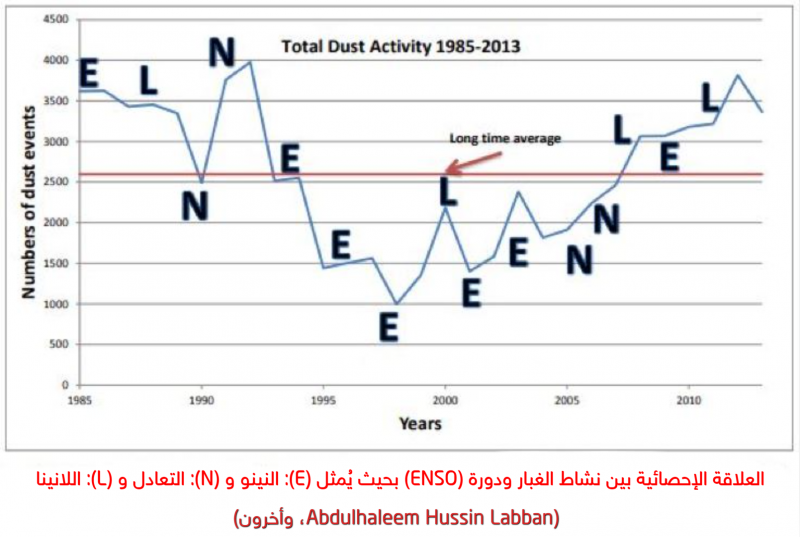 Fourth: The seasonal bulletin for the next three months includes higher than average activity for the poor

The seasonal bulletin issued by the Arab Weather Center stated that the weather during the months of May, June and July will be characterized by the following: