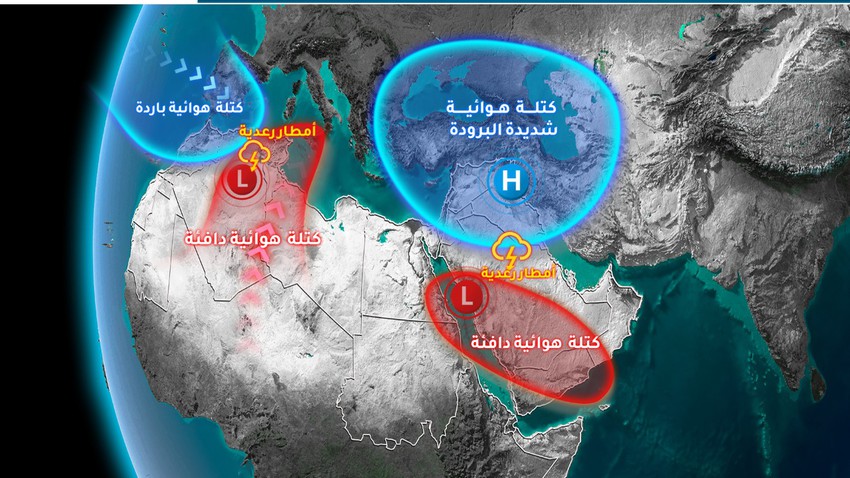 Weather of Arabia - the weather systems in the Arab world during the week are represented by the eruption of cold air masses towards the western Mediterranean, and the control of the Siberian air force on the surface over the western Mediterranean and parts of the Arabian Peninsula coinciding with the eruption of a cold air mass in the upper atmosphere, which causes the emergence of unstable weather conditions on some Middle Eastern countries. the details

Air disturbances on parts of Libya, Egypt and Sudan

Libya is affected by a cold air mass from the north-east at the weekend, as temperatures drop and rain falls in parts of the northeast as a result of instability, and with the middle and end of the week a new cold air mass approaches from the northwest, where the temperature decreases, winds activate and rain falls in parts of the country. Northwest of the country, God willing.

While Egypt continues to be affected on Sunday by humid air currents that lead to precipitation in parts of the north of the country, and with Monday, a cold air mass escapes in the upper layers of the atmosphere, where a state of atmospheric instability arises that continues until Wednesday, which causes rain in areas Wide from northern Egypt, including the capital, Cairo, God willing.

Stable weather in most of the countries of the Levant and unstable weather conditions in Palestine, Jordan and Iraq

Temperatures are rising and a stable atmosphere prevails in all countries of the Levant on the first day of the week, but parts of Iraq continue to receive precipitation during the weekend, especially in the northern regions, with widespread formation of frost, ice and freezing in large areas of Iraq, and from Monday and through Tuesday On Wednesday, a cold air mass is approaching in the upper atmosphere, where gradually a state of atmospheric instability arises, starting in southern Palestine, and extending towards random parts of Jordan and later reaching parts of Iraq, causing thunderstorms of rain and hail, "God willing."

While the atmosphere remains stable in the rest of the countries of the Levant until the end of the week, with indications of the return of rain on the country's coasts as of Thursday, and it is not possible to go into details due to the time period and the possibility of changing the data.

The weather is cooler than usual in Kuwait at the beginning of the week, and the same weather systems affecting Iraq move towards the country in the middle of the week, where an unstable atmosphere prevails and thunderstorms fall in large areas of the country, God willing, as the country continues to be affected by unstable weather conditions. Stable until the end of the week.

Whereas the weather is cooler than usual in the north and parts of central Saudi Arabia most days of the week, due to the extension of the Siberian air height, while the weather is warm in the southern regions, and despite this, separate and random parts of the country continue to be affected by unstable weather conditions, This causes rain clouds of a local and random nature, and rain showers and hail, God willing.

Stable and warm during the day in Qatar and Bahrain

A stable and warm atmosphere prevails during the day, seven days a week, in different regions of Qatar and Bahrain, as there is no fundamental change in the atmosphere during the coming days, with the continuation of cold weather in the late night hours, "God willing."

The atmosphere is stable and warmer than usual in the Emirates and Oman, and the rains continue in western Yemen

A stable atmosphere prevails throughout the days of the week in all regions of the Emirates and the Sultanate of Oman, and temperatures range from the late twenties to the early twenties to the mid-thirties, while the weather remains tilted to cold over some areas at night, while there is no change in the description of the weather in Yemen, with the exception of continuing precipitation Thunderstorms on the western highlands of the country, God willing.

Air systems in the Arab world during the current week, God willing

Monday | A slight additional rise in temperatures as the weather continues