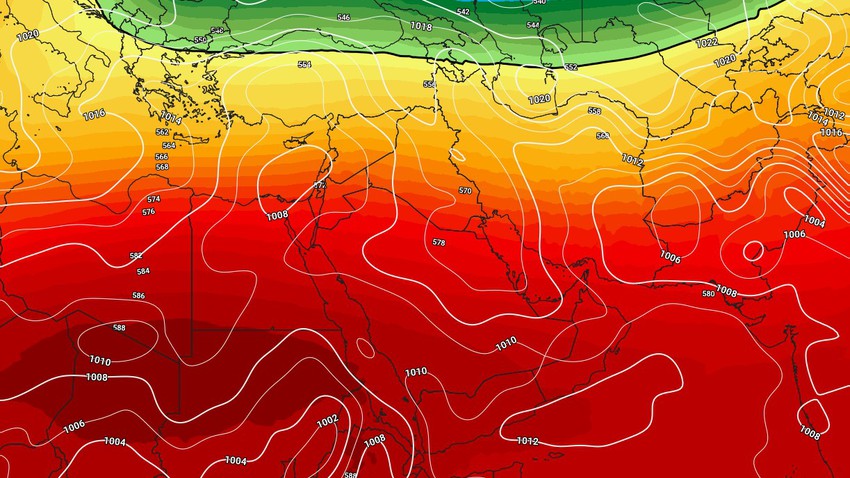 Morocco, Algeria and Tunisia continue to be affected by unstable weather conditions during the first part of the week, as a result of the synchronization of a surface air temperature depression with a cold air mass in the upper atmosphere, which causes the development of thunderstorms and heavy rain in many areas, which leads to the continued formation of torrents, with falling Snow is over the high peaks of the Moroccan Atlas Mountains and the weather is cold over the mountain heights, relatively cold in the northern regions and warm in the center and south of the country during daylight hours, and the effect of thunderstorms extends towards Tunisia during the night of Monday / Tuesday and Tuesday, as heavy thunder rains fall on Various parts of the north and center of the country, in a cold climate in many Tunisian regions.

While no major changes are expected to the weather description during the rest of the week in Morocco, Algeria and Tunisia, a regression will occur in the inclusiveness of unstable weather conditions on Wednesday as thunder clouds disperse randomly, with the return of stability to the airspace in Morocco and the continued impact of Algeria and Tunisia Thunderstorms fall the rest of the week, God willing.

An air depression of Khamasini that affects Libya and Egypt, and a hot climate on Sudan

Temperatures rise steadily over Libya until the middle of the week, coinciding with the country being affected by a Khamasini depression during Monday and Tuesday, in a hot climate in central and eastern Libya with the emergence of high clouds and the activity of the western winds laden with dust and causing dust, while it is expected that the north winds will burst into Lower temperatures After the middle of the week, it will work, "God willing," to reduce temperatures and increase the chances of precipitation in parts of the northern coasts.

In the same context, the atmosphere at the beginning of the week will be warm over the Republic of Egypt, with the extension of the same five-year air system from the Libyan lands to the Egyptian lands on Tuesday and Wednesday, which will lead to a sharp rise in temperatures and the transformation of the weather to become hot and dusty, but the temperatures will decline again after The five-day air depression receded during Thursday and the end of the week, and a return to moderate weather, but generally stable.

As for Sudan, the weather will be warm in the western regions, relatively hot to hot in the center of the country, very hot in the southern regions during the day, and generally warm at night, with the occurrence of local formations of rain clouds in limited parts of the east of the country. Hot to very hot in all regions during the rest of the days of the week, and temperatures are at levels of forty to the south.

Accelerated weather fluctuations in the Levant and Iraq

Relatively cold weather prevails in Syria and Lebanon and showers of rain fall in different parts during the first days of the week, while the weather is stable in Jordan and Palestine, and the weather is generally warm during the day, and temperatures rise in all countries of the Levant on Tuesday and the weather turns to become warm, With a significant rise in temperatures on Wednesday, especially in Jordan and Palestine, as a result of the country being affected by the first pentagonal air depression for such a time of the year, with the emergence of high clouds and the prevalence of dusty weather, with varying rates according to the region.

While numerical indicators indicate that the country will be affected by a cold air mass rushing behind the Khamasini depression during the weekend, which will lead to a significant drop in temperatures so that the cold weather will return with activity on the speed of the westerly winds and precipitation in some areas, and details will be discussed later. .

Whereas the weather in Iraq is warm most days of the week, with opportunities for showers of rain and snow over the peaks of the northern mountainous hills, specifically the borders with Turkey, and the same five-year air system extends from the Levant towards Iraq after the middle of the week, amid expectations of a decrease Great on degrees during the weekend, and high chances of thunderstorms and snowfall over the northern mountainous heights, "God willing."

The weather is warmer than usual in Kuwait and Saudi Arabia

Warm and stable weather in Qatar and Bahrain

The weather continues to be warm in Qatar and Bahrain during daylight hours, and the weather is pleasant during most of the nights of the week, in a stable atmosphere, and no rain is expected.

Rising temperatures in the UAE, Oman and Yemen

Temperatures rise steadily during most of the week in the Emirates, Oman and Yemen, in an atmosphere much hotter than usual for daylight hours, and during the weeknights, the weather is warm in the UAE and Oman, and relatively cold in Yemen.

Alzaaq | If you are residents of these areas, prepare the heaters

Video | A strange scene, and a citizen trusted him in the sky of Saudi Arabia .. The reason is a cloud!

10 lowest regions in the world..some of them in Arab countries