The Arctic is facing a real environmental disaster ... and Putin declares emergency 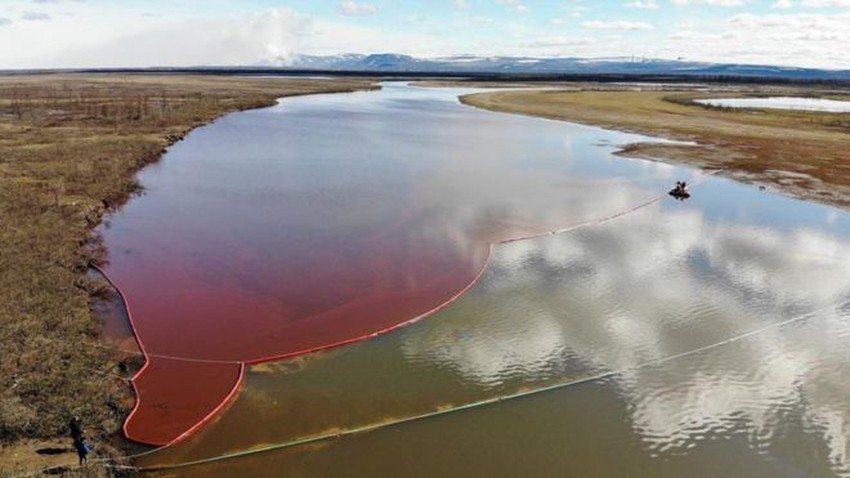 Arab Weather - Russian President Vladimir Putin declared a state of emergency after 20,000 tons of diesel oil spilled into a river inside the Arctic Circle .

The leak occurred when a fuel tank collapsed at a power station near Norilsk in Siberia last Friday, May 29 .

The head of the power plant, Vyacheslav Starostin, was held until July 31, but has yet to be charged, according to the BBC, and the plant is owned by a subsidiary of Norilsk Nickel , the world leader in nickel and palladium production .

The Russian investigation committee considered that the issue of pollution and neglect in dealing with this leak is "criminal", as there was a delay of two days in reporting to the Moscow authorities about the leak .

An emergency means that the additional Russian forces will go to the area to assist in the clean-up operation .

President Putin expressed his anger after discovering that officials had only learned of the incident on Sunday, as Russian Emergency Minister Evgeny Zinevich told him that Norilsk had spent two days trying to contain the leak before alerting his ministry .

Meanwhile, Norilsk Nickel said in a statement that the accident was reported in "an appropriate and timely manner".

It is believed that a landslide under the fuel storage tanks caused the leakage caused by the melting of Arctic frosty soil due to exceptionally hot weather for this time of year.

The spilled oil drifted about 12 kilometers (7.5 miles) from the accident site, converting large areas along the Amparnaya River to the scarlet red.

The scale of the environmental disaster

Alexei Knejnikov, an expert from the World Wildlife Fund, told Agence France-Presse that the accident is believed to be the second largest accident in modern Russian history by volume .

Greenpeace compared it to the Exxon Valdez disaster in 1989 in Alaska .

What can be done?

The accident sparked blatant warnings from environmental groups, which say the river's spill volume and geography will make it difficult to clean up the river .

Oleg Metfall, the former deputy head of the Russian Environmental Monitoring Agency, "Rosperrudnadzor", said that such an accident never occurred in the Arctic region, adding that cleaning could cost 100 billion rubles (1.2 billion pounds; 1.5 billion dollars) and take between five and ten Years.

It is noteworthy that it is not the first time that Norilsk Nickel caused the oil spills, in 2016, it admitted that an accident in one of its factories was responsible for turning a neighboring river to red.