The capital, Amman, records its highest average temperature in April in 13 years 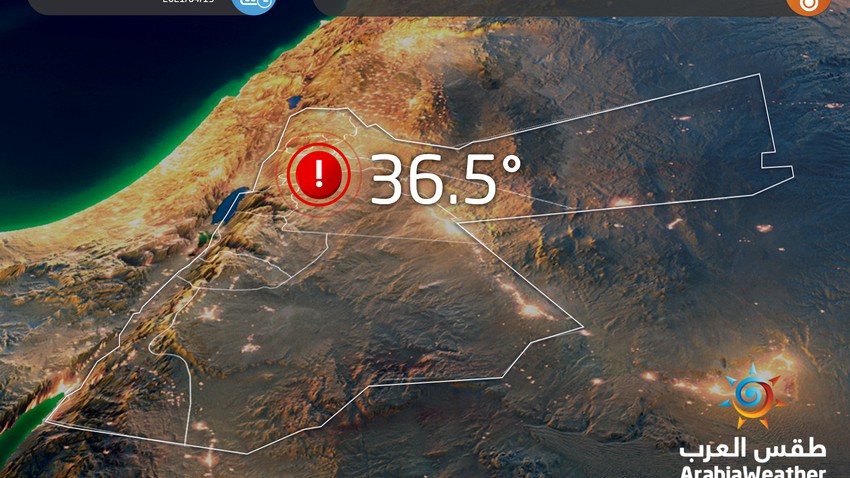 Weather of Arabia - Weather monitoring data showed that the maximum temperature recorded today in parts of the capital, Amman, exceeded the 36 Celsius barrier in the east of the capital. The data of the weather monitoring station at Amman Civil Airport in the Marka region showed that the maximum temperature there was recorded on Monday 19/4/2021 to about 36.5 degrees Celsius.

Returning to the archive monitoring data of the airport, the maximum temperature recorded today is considered the highest in 13 years, as the temperature on April 24 2008 was about 37 degrees Celsius.

The prevailing atmosphere in the Kingdom is very unusual if the temperatures rise from their usual rates for such time of year by more than 15 degrees Celsius as a result of the control of early hot air masses that rushed into the Kingdom and caused an atmosphere closer to summer than spring.

On Tuesday, it is expected that the weight of the hot air masses will diminish slightly while they remain in control of the Kingdom's airspace, God willing, with the continuing hot, dry and dusty weather in most regions, and very hot in some areas of the Jordan Valley, the Dead Sea and Aqaba, with the emergence of quantities of medium and high clouds.

On Wednesday, there is another decline in the effects of the hot air masses, but they remain in control of the kingdom's atmosphere, so that the weather returns to become warm spring in most regions and tilted to heat in the afternoon and afternoon, while the weather is generally relatively hot in the Jordan Valley and the Dead Sea regions and Aqaba, and quantities of medium and high clouds appear