The Civil Defense deals with the injury of (20) people with shortness of breath due to heaters accidents in the governorates of the capital, Zarqa and Irbid 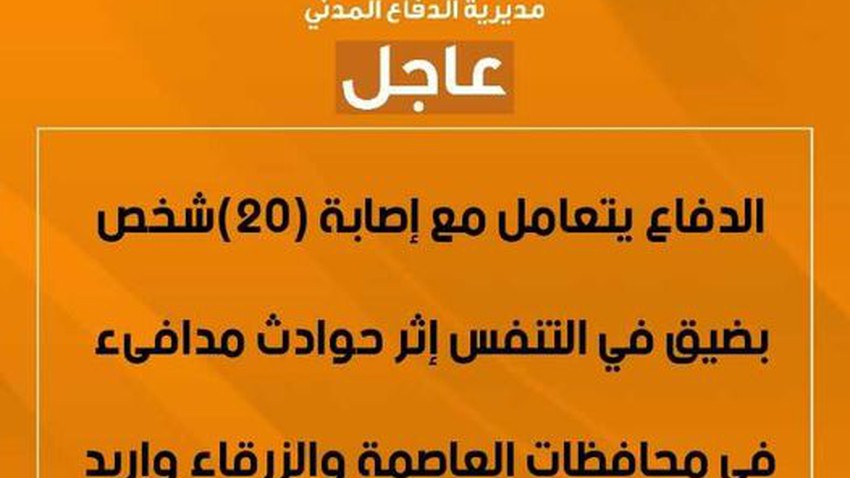 In another context, the Civil Defense Directorate in West Amman dealt with the injury of six people with shortness of breath after inhaling the gases emitted from a gas heater in the Wadi Al-Seer area, as the necessary first aid was carried out for them and transferred to Al-Hussein Medical City Hospital, and their general condition is moderate.

As for the governorate of Irbid and the central Al-Hisbah area, the civil defense teams in western Irbid moved to four people who were short of breath due to a gas stove, as the necessary measures were carried out for them by ambulance teams and transferred to Princess Basma Teaching Hospital with moderate health condition.

Two people also suffered from shortness of breath after inhaling the gases emitted from a kerosene heater in the Khraibet Al-Souq area, so ambulance teams in the Civil Defense Directorate in East Amman provided them with the necessary first aid and transferred them to Al-Totanji Governmental Hospital, and their general condition was described as moderate.

Hence, the Civil Defense Directorate calls on citizens to adopt proper preventive behavior while using heaters of all kinds, ventilating the house from time to time, and not sleeping while the heater is on. Calling God safety for everyone.