The death toll from the devastating earthquake in Haiti exceeded 1,200... and a storm is coming that threatens the worst 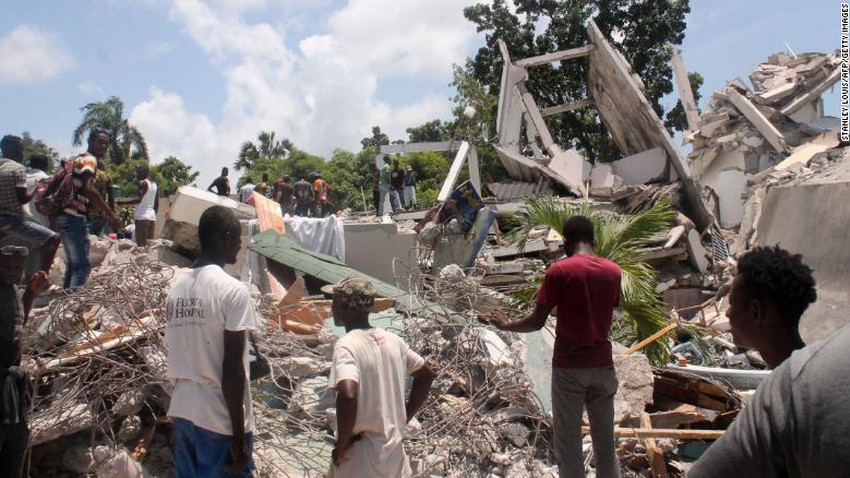 Arabia Weather - The death toll in Haiti rose after the 7.2-magnitude earthquake that struck the country on Saturday (August 14), killing at least 1,297 people and injuring more than 5,700, according to the country's Civil Protection Agency.

On Sunday, the Civil Protection Service reported that of the 1,297 deaths, 1,054 are in the Southern Administrative Region, 119 in Grand Anse, 122 in Niepce and two in the Northwest Region.

Agency officials said the quake destroyed 13,694 homes and damaged another 13,785. The devastation has also pushed hospitals to the brink and closed roads that would transport vital supplies.

The devastating earthquake in Haiti occurred at 8:30 am local time at a depth of about 10 km, with its epicenter about 12 km northeast of Saint-Louis-du-Sud in the southwestern part of the country.

The location of this earthquake is about 96 kilometers to the west of the catastrophic 7.0 magnitude earthquake in 2010 that killed an estimated 220,000 to 300,000 people.

Saturday's earthquake was much less damaging than the 2010 earthquake. The United Nations Office for the Coordination of Humanitarian Affairs said on Sunday that a UN reconnaissance mission in the affected areas found "less severe damage than initially anticipated".

This earthquake is just another crisis on top of what the struggling country is still dealing with, which is still dealing with the fallout from the 2010 earthquake, in addition to the worsening political stalemate following the assassination of President Jovenel Moise last month, the coronavirus pandemic and food insecurity.

Haiti in the path of Storm Grace

In addition, Haiti is likely to see high winds and torrential rain from Tropical Storm Grace from Monday to Tuesday, which could lead to floods and mudslides, further complicating relief efforts.

The entire coast of Haiti is under tropical storm monitoring, which means tropical storm conditions are possible within 48 hours, according to the National Hurricane Center.

"I am concerned about the coming storm because it could complicate the situation for us," said Jerry Chandler, head of Haiti's Civil Protection Agency.

Jordan - update at 4:50 pm | Rain clouds approaching the north of the Kingdom, and strong waves of dust over the rest of the regions