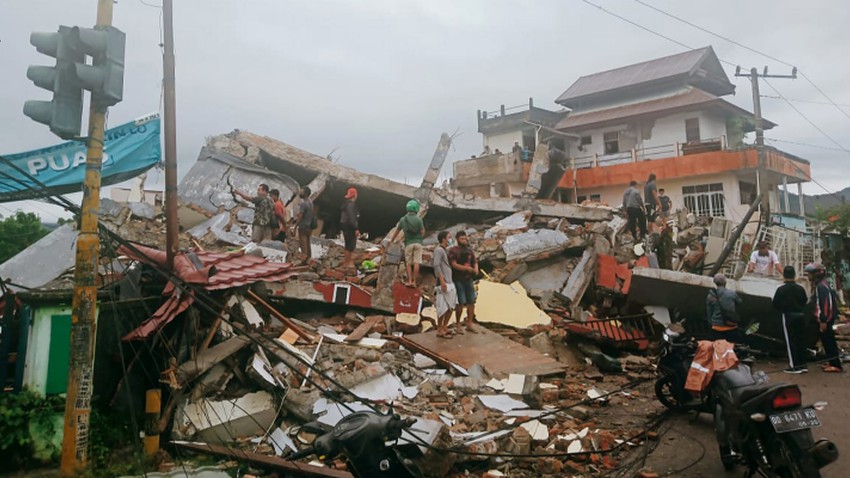 Weather of Arabia - A 5.6-magnitude earthquake struck the Indonesian island of Java, killing about 162 people, according to the latest toll. Hundreds were injured, buildings were damaged and some of them shook, reaching the capital, Jakarta, 100 kilometers away, according to officials, and quoting Al Jazeera news.

#earthquake in #Cianjur of Indonesia.
5.6 magnitude Earthquake left 30 dead and over 300 injured. Heartbreaking and devestating visuals from #Indonesia
Pray for Cyanjur people. pic.twitter.com/kb9NMGe07o

At least 56 people have been killed following an earthquake in Indonesia, West Java governor Ridwan Kamil has confirmed.

During the #Earthquake in Indonesia, worshipers continued to pray Subhan Allah in the mosque.
. #Earthquake pic.twitter.com/07KPNssvPT

West Java Governor Ridwan Kamel said - in a video clip - "I regret to announce that 162 people have died," which was confirmed by a spokesman for the local administration in the city of Cianjur in West Java.

Doctors treated patients outdoors, after the earthquake was felt as far away as the capital, Jakarta, and hospitals in the city of Cianjur were left without electricity for several hours.

Indonesia's disaster management agency said people were still trapped under the rubble as night fell. More than 2,000 homes were also damaged, and 5,000 people were taken to evacuation centres.

And the governor of West Java province pointed out that the electric current had partially returned by evening, without specifying whether the supply was secured through generators or connected to the electricity network.

And the governor of Java had previously said that the data indicated that "more than 700 were injured. And given that many people are still stuck at the scene of the disaster, we expect the number of injuries and deaths to rise with the passage of time."

The Indonesian Meteorological Authority said it recorded 62 aftershocks in Cianjur after the quake, with a magnitude ranging between 1.8 and 4 degrees.

The epicenter was located in the Cianjur district of West Java, according to the US Geological Survey, and was also felt by the residents of Jakarta, 100 km away, as people took to the streets in panic.

Indonesia regularly witnesses earthquakes or volcanic eruptions, due to its location on the Pacific Ring of Fire, where tectonic plates meet.

In 2018, the island of Lombok and the neighboring island of Sumbawa were hit by an earthquake, killing more than 550 people.

In the same year, another 7.5-magnitude earthquake triggered a tsunami that struck Palu on the island of Sulawesi, leaving some 4,300 people dead or missing.