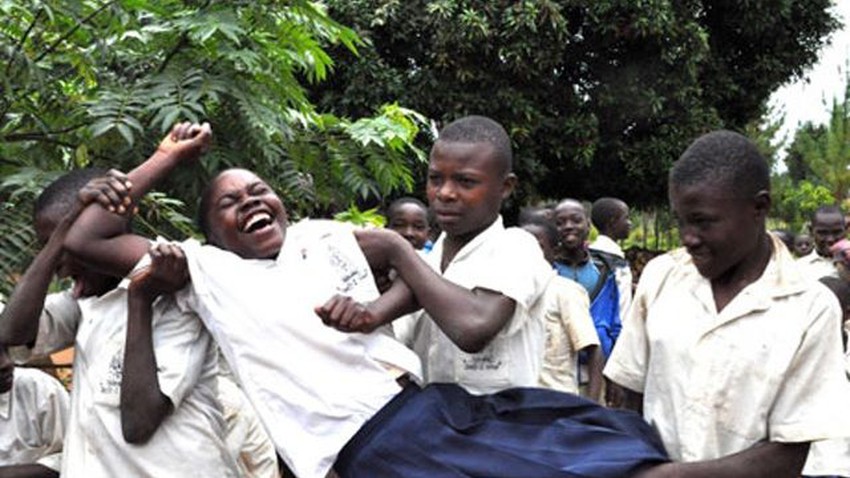 Weather of Arabia - Humankind has known throughout history a large number of epidemics that have claimed millions of lives, most of these epidemics were organic with known causes such as plague and cholera, but some epidemics remained a mysterious mystery that baffled scientists, perhaps the most prominent of which was the laughter epidemic that afflicted the town of Kashasha in Tanzania (it was its name at the time Tanganyika) in 1962.

The story began on January 31, 1962, inside a girls' school in the Tanzanian village of Kashasha when three girls started laughing non-stop. Dozens of female students in the school, and the continuous bouts of laughter continued for more than a month, forcing the school to close in March of the same year.

The laughter epidemic in Tanganyika in 1962

Although what became known as the Tanganyika Laughing Epidemic began with just three girls, it spread to 95 of the 159 female students at the boarding school for girls aged 12-18.

The outbursts of laughter, lasting between six hours and two weeks, became so annoying that teachers at the school had to cancel classes and send students home, although neither teachers nor staff at the school were affected.

But closing the school did not stop the epidemic, but rather it moved to other villages and cities, to end the school year by closing 14 schools, and diagnosing thousands of young men and women who were infected with the laughter epidemic.

The laughter epidemic was more than just a bad case of laughter. Fits of laughter that struck without warning were accompanied by dizziness, respiratory problems, bouts of uncontrollable screaming and crying, rashes, restlessness, and the desire to run aimlessly. Even severe flatulence.

About a year and a half after the first cases were recorded, the laughter epidemic mysteriously disappeared, as the epidemic began to recede on its own after 6 months, the laughter bouts became shorter until it stopped completely, schools reopened, and the people of Tanganyika region returned to their lives.

What caused the laughter epidemic in 1962?

Until today, science has not found any medical explanation for this phenomenon, which has remained a mystery, but the scientist Charles Hampelman considered that the most likely reason for the explosion of this bout of laughter is the increasing anxiety of the young segment in the country, due to psychological pressure. Tanganyika gained its independence from Britain, creating a period of transition and a period of turmoil in the region.

Young people in particular were worried about their unknown future, and the turmoil coincided with a comprehensive reform of the local school systems, which led to a lot of pressure on students to raise their performance, but it is an ijtihad interpretation that has not yet found any scientific or medical support.

You may also be interested in: The strangest things that countries did in 2021