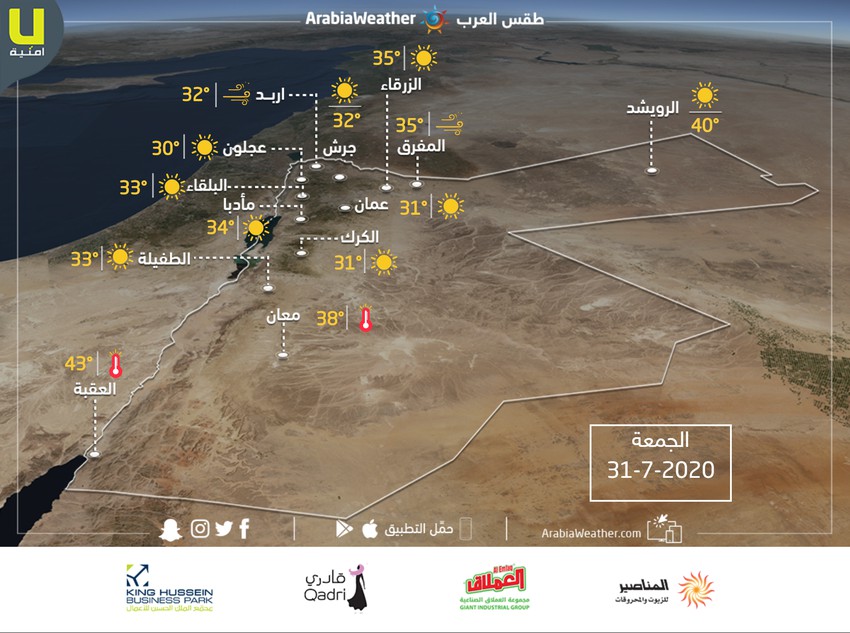 The first day of Eid Al-Adha `Friday` ... the impact of the heat wave receded as temperatures remain above their levels

Reduced during the day as it stays above its rates

There is a decrease in temperatures, but they remain 5-7 ° C above their average for this time of year.

And the weather turns to become relatively hot in the mountainous regions, and hot in the interior regions, the Bahlamet, the Jordan Valley, Aqaba and the Badia regions.

The wind will be northwesterly moderate speed, active in the afternoon and be dust in most of the Badia regions.

With the hours of the night , an air mass with mild temperatures rushes to the kingdom to replace the hot air mass, so a major breakthrough in the weather occurs and a significant decrease in temperature is observed.

So there is a significant decrease in temperature and a noticeable increase in humidity.

And the weather turns to be nice in most of the regions, and mild in the Jordan Valley, Bahr al-Dead, and Aqaba /, some low clouds appear over the highlands.

The winds will be northwesterly moderate to energetic, accompanied by strong gusts over the Al-Sharah Mountains in the south of the Kingdom.