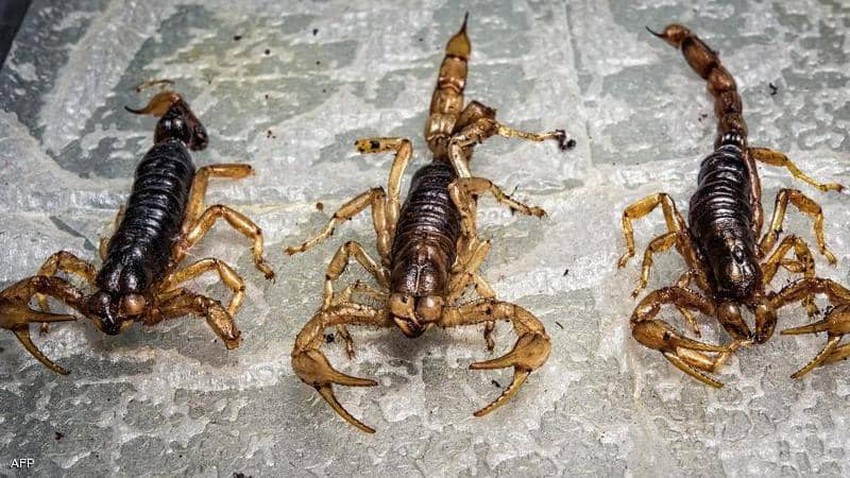 Weather of Arabia - The head of the Climate Change Information Center in the Egyptian Ministry of Agriculture, Mohamed Fahim, revealed the reason for the arrival of scorpions to the homes of the people during the impact of heavy rains on the region during the rains in Aswan Governorate.

And Mohamed Fahim indicated, according to what was reported by the Egyptian media, that “the last third of the autumn season is a gradual transitional phase to the winter season, so that creatures and living creatures can withstand low temperatures,” explaining that “talking about the appearance of scorpions in Aswan” And its relationship to rain, is due to the heavy rainfall, which amounted to 4.5 milliliters, which led to the occurrence of surface run-off and torrents.

Fahim stressed that "scorpions did not enter people's homes, but water carried them," noting that "scorpions cause less poisoning than snakes or snakes, but they are still poisonous, and their sting leads to death if a person's treatment is delayed."

Fahim gave advice to citizens, residents of rain-prone areas, with desert backs nearby, and near mountains, in which he drew their attention to knowing the hospitals that contain vaccines so that those who are infected with scorpion stings can be treated.

The Egyptian Ministry of Health denied the death of any citizen as a result of stinging scorpions that came out of their burrows in Aswan Governorate in the south of the country due to torrential rains.

Khaled Abdel Ghaffar, the Egyptian Minister of Higher Education and Scientific Research and the acting Minister of Health and Population, said in a statement that "503 citizens received anti-scorpion vaccines in the southern governorate of Aswan, after they were bitten by scorpions that abandoned their burrows due to the torrential rains."

He confirmed that no deaths resulting from scorpion stings were recorded.

For his part, Alaa Eid, head of the Preventive Medicine Sector at the Egyptian Ministry of Health and Population, confirmed the periodic follow-up by the ministry to ensure the availability of sufficient stocks of anti-scorpion stings in all hospitals and health centers at the level of the governorates of the Republic.