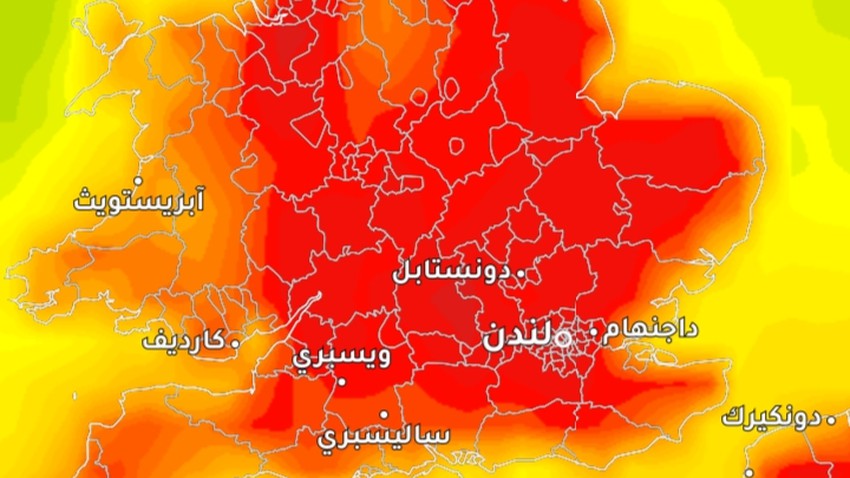 Arab Weather - Weather maps in the Air Operations Department of the Arab Regional Weather Center indicate the increasing indications that the United Kingdom (Britain) is being affected by a severe and unusual heat wave in which temperatures may reach record levels.Details

The heat wave hits Britain and its peak Monday and Tuesday

According to the same weather maps, the heat wave is expected to start on Sunday and intensify and peak on Monday and Tuesday, accompanied by a significant rise in temperatures in all regions, with the atmosphere turning to become very hot even in the capital, London, and it is expected that the capital of London will record record temperatures during the peak that may touch 40 degrees Celsius, and thus it will be hotter than Damascus, Beirut, Amman and Jerusalem for the same period.

As for the rest of the regions, it is expected that advanced temperatures will be recorded in the thirties, amid serious warnings of the risks of long and direct exposure to the sun’s rays to avoid sunstroke that may lead to death, God forbid, in the end, and it is also advised to drink sufficient quantities of fluids and refreshments constantly, amid serious alerts. from burning forest fires.

According to climate records, the highest temperature recorded in Britain in history was 38.7 degrees Celsius in Cambridge in 2019, but will temperatures be recorded above them on Monday, let's wait.