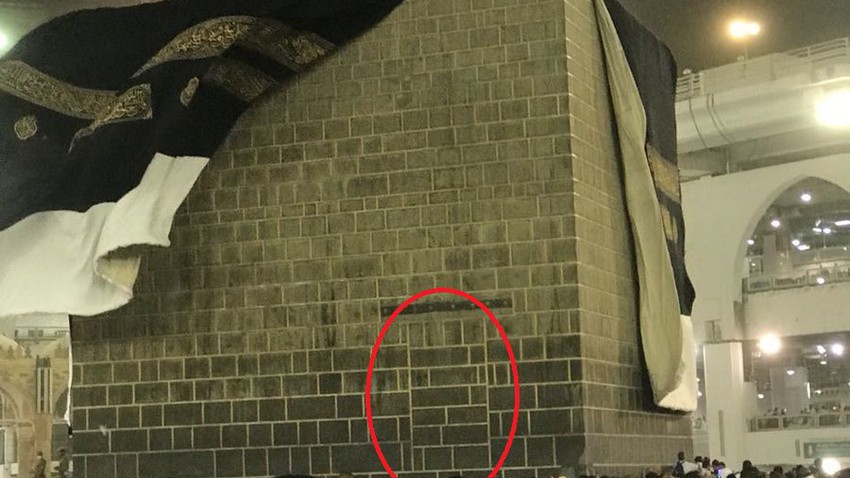 Weather of Arabia - Sinan Khalaf - In mid-August of 2018, the Makkah region was subjected to a thunderstorm accompanied by strong winds, as a result of which the garments of the honorable Kaaba were loosened, and the intensity of the winds removed the Kaaba's garment to reveal a closed door, which is its western door opposite the King Fahd door of the Grand Mosque. It was closed by Al-Hajjaj bin Yusuf Al-Thaqafi during the reign of Caliph Abdul Malik bin Marwan.

The boundaries of the door appeared to the viewer of the Kaaba through its lines that cross the horizontal building lines surrounding the Kaaba on all sides.

Mansour al-Dajani, a researcher in the history of Mecca, revealed that when Ibrahim, peace be upon him, built the honorable Kaaba, he made for it two doors, an eastern gate and a western gate, as stated in Sahih al-Bukhari from the hadith of Aisha, may God be pleased with her, that she said: The Prophet, may God’s prayers and peace be upon him, said: “If only your people had a modern age. In ignorance, I would have ordered the House to be demolished, so I inserted what was brought out of it into it, and stuck it to the ground, and made two doors for it, an eastern gate and a western gate, and with it I reached the foundation of Abraham.”

And when the Quraysh built the Kaaba, spending was limited to them, so they shortened the Kaaba from the building of Abraham, peace be upon him, so they left six cubits and a handspan of the stone and made for it one eastern door high from the ground, as it came in Sahih Muslim on the authority of Aisha, may God be pleased with her, who said: I asked the Messenger of God, peace be upon him, about the walls? Home security is it? He said, “Yes.” I said: Why did they not bring him into the house? He said, “Your people are limited in spending. I said: What is the matter with its high door? He said: Your people did that in order to enter whoever they wanted and prevent whoever they wanted.

The pilgrims demolished 6 cubits and a span of it from the next to the stone and built it on the foundation of the Quraysh, on which it was confined. Murad IV in the year 1040 AH, after the torrent that occurred in Mecca in Sha’ban in the year 1039 AH caused the fall of the Levantine wall of the Kaaba and some of the eastern and western walls, so they were rebuilt as they were in the last building during the reign of Caliph Abdul-Malik bin Marwan.

The historian and scholar Ibn Allan al-Siddiqi al-Makki, who was a contemporary of the architecture of the glorified Kaaba during the reign of Sultan Murad IV, mentions and described this accurately in his books, including the news of the great supporter Murad of building the house of Al-Wahhab Al-Jawad, which was investigated by Dr. Khaled Azzam Al-Khalidi, as well as the manuscript of the general news of the grandiose construction of the Sacred House, which was achieved by Abu Hashem Ibrahim bin Mansour Al-Hashimi, the Prince.