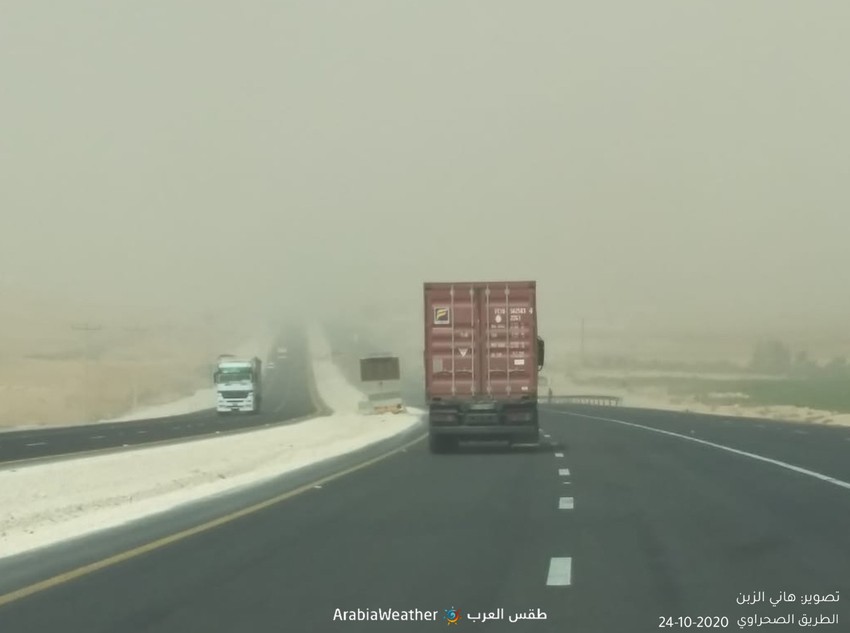 The Kingdom is witnessing strong winds and dust that will continue during the next 24 hours, with chances of rain later and important recommendations to deal with the weather.

Weather of Arabia - the Kingdom is witnessing brisk southeast winds with strong gusts at intervals in some areas, causing dust waves to form at intervals that lead to a decrease in the horizontal visibility.

The weather continues on Saturday in autumnal temperatures in most regions, but it turns dusty in general in several areas. Gradually, quantities of clouds and medium and high clouds appear.

This comes as a result of the deepening effect of the Red Sea Depression on the Kingdom, which is accompanied by the flow of air currents with higher than average temperatures in the atmosphere near the surface of the earth.

And with the hours of this night and tomorrow, the deepening effect of the Red Sea depression coincides with the progression of a cold air mass in the upper atmosphere, and as a result, the Kingdom is expected to be affected by a state of atmospheric instability

The weather continues on Saturday / Sunday night, somewhat dusty in several areas, but quantities of clouds and clouds at different heights will gradually multiply during the night.

The opportunity is gradually opening up and with the passage of time for thunderstorms of rain, God willing, in random areas of the Kingdom.

On Sunday , temperatures are expected to drop close to their general levels to slightly higher.

The autumn weather will be moderate in general, with the emergence of quantities of clouds at different heights, and the opportunity is ready for thunderstorms of rain, God willing, in random areas of the Kingdom, following which torrents flow, especially in the desert regions.

The winds are southeasterly to easterly moderate, they become active during the passage of clouds and thunderstorms, causing temporary dust waves.

And due to the prevailing and expected weather conditions, there are some recommendations that must be taken into consideration, which are:

1) Attention to the risks of high levels of dust in the air for respiratory and ophthalmic patients and for asthma patients.
2) Attention while driving from the low horizontal visibility, especially on desert and external roads due to dust.
3) Ensure that outdoor billboards are installed as a result of the expected wind speed activity.
4) Keeping away from valley streams, reefs and torrential streams due to the high risk of their runoff due to thunderstorms.
5) Pay close attention and caution while driving on the roads when the rain starts

On the other hand, the media spokesperson for the Public Security Directorate said that due to the state of air instability the Kingdom will witness, the Civil Defense Directorate calls on the brothers the citizens to: -

1. Minimize movement on roads that witness heavy dust as much as possible
2. Be careful and careful while driving, especially on external roads in various parts of the Kingdom
3. The necessity to retain special treatments for people suffering from asthma and chest crises
4- Moving from low places to higher and safer places, especially for those who live in mobile housing units such as tents and hair houses.
5- Do not hesitate to call the emergency phone (911) if needed

Jordanian Health: 67 new deaths from Corona, may God have mercy on them, and 5,000 new infections

Friday | Relatively cold weather in all regions of the Kingdom

Updated at 12:30 pm | More rain clouds advance to the north and center of the kingdom