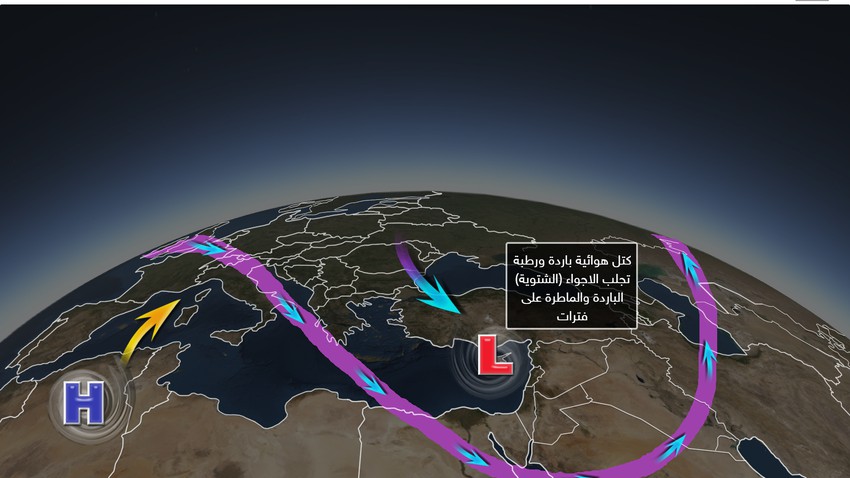 It is expected that the long-term air stability situation experienced by the Kingdom during the past period will end on Tuesday, as the Kingdom and the region enter within the south-western air currents in the foreground of a "deep" air depression accompanied by a cold and moist air mass "remarkably", at which time the Turkish territories are taken. Its center, and it deepens later on at the end of the week, atmospheric pressure, in the island basin of Cyprus, where the impact reaches its climax on the Kingdom and has a direct impact.

In this report, we deal with the last details of this depression, according to the weather updates issued this morning, Sunday, 12-22-2019, from the global and local numerical models of weather forecast staff in "Arab Weather".

A "third" air depression, which peaks on Thursday, is accompanied by remarkably wet western currents

The weather forecast staff believes in "Arab Weather" that this depression, which will begin to affect the Kingdom effectively in terms of rain and cold in the second half of Wednesday, and earlier in Syria, Lebanon and northern Palestine, will be classified as a third degree, an air depression Medium to high efficacy at intervals, within the "Arab Weather" index of the severity of the depressions from the weakest first degree towards the most severe and exceptional fifth degree.

And it increases in its impact, after the will of God, on Thursday, as it rains heavily in the north and central of the Kingdom, and later in the day in the southern mountains, which may receive some "snow showers" in its higher areas, which are the highlands of Tafila and Shara more than 1400 - 1,500 meters above sea level,

According to the current indicators, the depression will continue to affect strongly until Friday afternoon, before retreating clearly later, with the weather remaining cool and foggy with separate showers of rain, as the effect of the depression generally extends for more than 48 hours, God willing.

It is expected that the rains that accompany this depression will constitute a strong impetus for the current rainy season, especially in the north and center of the Kingdom, and also accompanied by strong winds blowing most of the periods and approaching their gusts to the 100 km / hour barrier.

For more updates and details, follow the periodic and daily weather reports issued by the weather forecast staff in "Arab Weather".