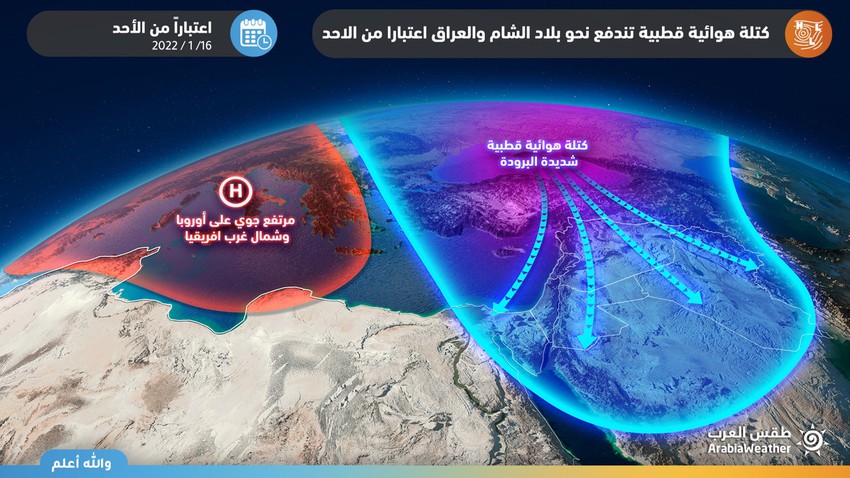 Arab Weather - From the operations room of the Regional Center "Arab Weather", the latest weather maps received from global centers indicate that it is expected that very cold and polar air masses will rush towards the eastern region of the Mediterranean Sea with several different axes that cause rainfall at intervals and a freezing Siberian atmosphere as of today Monday, January 17, 2022 and for at least the next ten days.

In the details, it is expected that the depression will move eastward from the atmosphere of the Levant during the late hours of the night of Sunday / Monday, so that the chances of precipitation will weaken, the clouds will decrease, and the weather will turn to become very cold in most areas, and a strong wave of ice and freezing will occur on most areas, including roads. External and internal, with expectations that there will be an additional deepening in the impact of the polar winds, cold and dry rushing from Siberia on the Levant in the middle of this week, with Siberian weather that is cold but sunny with the occurrence of ice and freezing until the late hours of the morning.

According to the numerical simulation indicators of the atmosphere, it is expected, God willing, to continue deepening the high altitude on the European continent and to expand northward at different periods during the coming period to reach the Scandinavian countries. 19-1-2022, and as a result, an air depression is formed in the eastern region of the Mediterranean Sea, accompanied by a cold air front that affects the Levant, and the frigid polar winds rush behind it again, and fears that frost will form again in different parts of the country.

In view of the continued presence of an atmospheric high over the eastern Atlantic and western European continents, and despite the distance of the time period, the numerical simulation indicators of the atmosphere show that the opportunity is ripe for more polar eruptions towards the region next week, but this time it seems that the axis of the eruption will be from another angle The arrival of this polar air mass again in the region forces the Levant region to continue the significant drop in temperatures and the occurrence of large-scale frost and ice waves, and the formation of new weather conditions and depressions, God willing.

As for snow, the arrival of these polar air masses near the region requires more complex weather systems to cause snowfall, including the drop of the polar mass to the water basin from the eastern Mediterranean so that an air depression is formed and the generator works for the occurrence of rain and snow precipitation, and the details cannot be deduced. All from now on for that period, but it is clear until the time of writing this report that there will be more rain in several areas in the Levant to improve the rainy reality, which suffers from great weakness, especially in Jordan and Palestine.