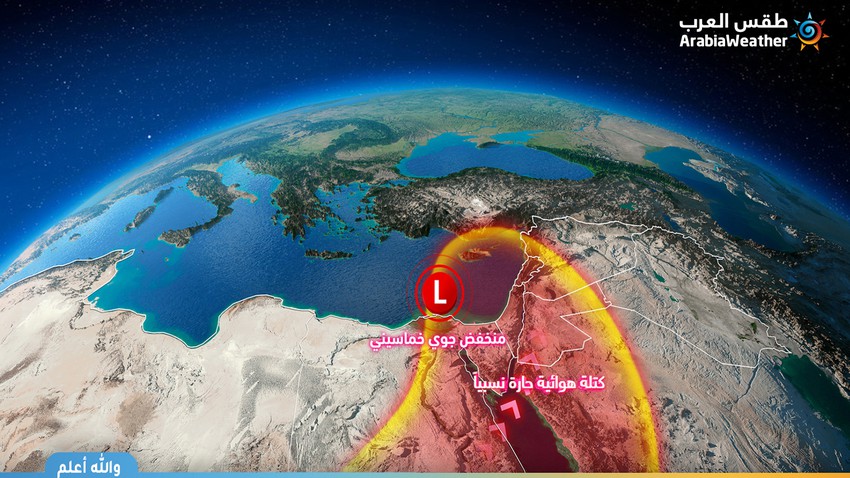 Weather of Arabia - The issued weather maps still indicate an expected approaching a five-point depression during the hours of the day on Monday towards the eastern Mediterranean basin coming from the Egyptian lands, accompanied by a relatively hot, dry and dusty air mass.

A relatively hot, dry air mass rushing towards the region on Monday

A relatively hot and dry air mass is pushing across the Egyptian desert and northern Arabia directly towards the Levant on Monday, at the forefront of a five-day depression, which in turn will cause a tangible rise in temperatures to become much higher than their rates for this time of year.

Quintessential weather conditions prevail in all cities and governorates of Palestine, Jordan, Syria, and Lebanon, where the weather is relatively hot in the mountainous areas, while it is remarkably hot in the rest of the regions, and the weather is dry, and the winds are northwesterly to westerly moderate, activating at times with high concentrations Dust in the air. 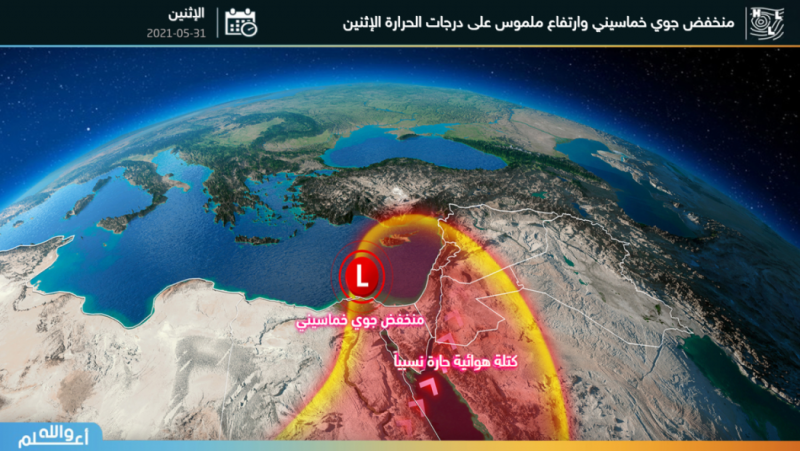 During the night hours, the weather is generally pleasant in most regions, while it tends to be cold during the late evening hours, and humidity levels rise and fog forms in the western highlands of Palestine and Syria, and the winds will be light to moderate westerly.

The same maps indicate an expectation of a gradual decrease in the temperature starting from Tuesday, coinciding with the beginning of the summer in terms of meteorology, as it returns and approaches its usual rates for such time of the year, so that the weather will be normal during the day, while it is pleasant at night.

Weather conditions and expected temperatures in the capitals of the Levant on Monday 31-05-2021:

The expected maximum temperature in Amman: 32 °

The expected minimum temperature in Amman: 19 °

The expected maximum temperature in Damascus: 35 °

The expected minimum temperature in Damascus: 17 °

The expected maximum temperature in Beirut: 29 °

The expected minimum temperature in Beirut: 21 °

Download the "Arab Weather" application, you can easily know the weather conditions in your country every day and every season.

Jordan - Update at 8:50 pm | Rainy clouds over parts of Karak and the east of the kingdom, accompanied by thunder

Jordanian Health: 1268 injuries and 6 new deaths from the Corona epidemic - may God have mercy on them all