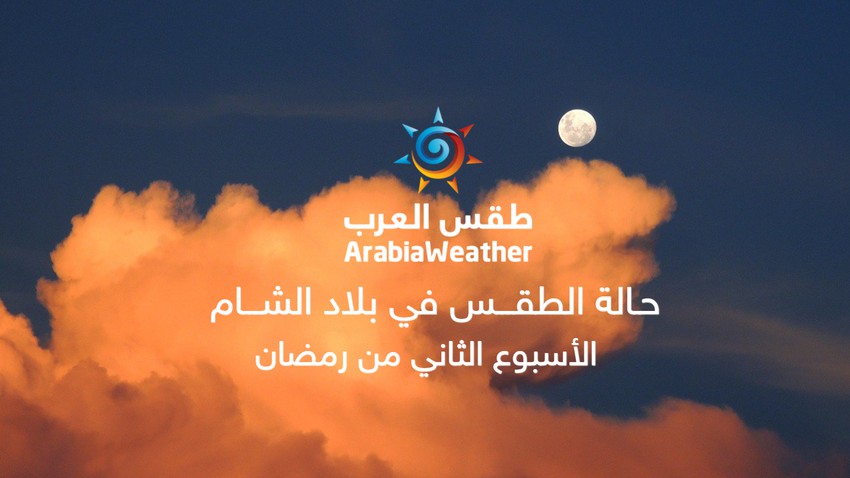 Weather of Arabia - Muhammad Aouina - The effect of the heat wave on the whole of the Levant begins on Saturday, resulting from the gradual effect of a very hot air mass rushing from the desert of the Arabian Peninsula towards the Levant, and its effect increases on Sunday and Monday, and as of Tuesday, temperatures will begin to decline And the decrease gradually, as the weather remains warm during the weekend, but less severe.

The hot weather is expected to intensify steadily from Saturday to Monday, and the peak of the heat wave will be on Monday, as the weather is expected to be between hot to very hot in various regions, and temperatures are expected to reach more than 10 degrees Celsius away from their general rates. For this time of the year, dry weather prevails due to low surface moisture levels due to dry easterly winds coming from desert areas.

As for the night hours, temperatures rise compared to last nights, so the weather tends to warmer in all regions.

The impact of the heat wave eased Tuesday

The effect of the extremely hot air mass is diminishing, especially on the western regions of the Levant and the high mountainous elevations, starting from Tuesday, however the atmosphere remains warm in general, and quantities of medium and high clouds appear interspersed with some thunderstorm clouds, and thunderstorms fall in parts of the eastern and southern regions. , Is actively associated with the speed of the westerly winds.

With the hours of the night, an air mass with gentle temperatures rushes to the Kingdom to replace the hot air mass, to witness the temperatures during the night hours a significant drop in temperatures, and a great moderation in the night weather.

On Wednesday, temperatures drop, and the weather is warm and sunny in spring in most areas, with some clouds appearing at different heights over some parts, and the weather turns to become relatively cold during the night hours.

A new hot air mass is expected over the weekend

The influence of tropical air height on the Levantine weather is renewed, so that the weather becomes hot in most regions of the Levant as a result of this potential hot mass.

The scientific reason for the eruption of these hot masses

According to Newton's law for every action, a reaction is equal in magnitude and opposite in direction, as a cold air mass pushes north of the African continent, this cold mass displaces the warm mass in front of it, and because the upper basins are running from west to east in a counterclockwise rotational movement Hot air rushes from west to east, as the cold basin at the threshold of the Sahara Desert contributes to the rush of hot air masses from the desert towards the Levant, where these masses are sometimes accompanied by the pentagram depressions, bringing with them the hot and dry air that crosses the desert, and thus a rise in temperatures in Layers of the atmosphere close to the surface of the Earth.