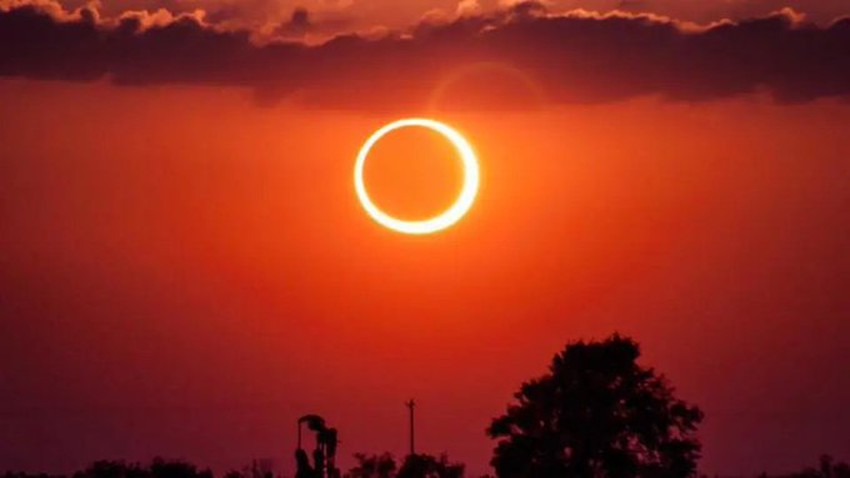 The Moroccan Initiative for Science and Thought: Earth is to be deposited in an annular eclipse on December 26th

Before the end of 2019, the globe will witness on Thursday, December 26, 2019 an annular eclipse of the sun, and the center of it is consistent with the coupling of the moon of Jumada I of 1441 Hijri.

This is the third eclipse of the Sun during this year after the eclipse of January 6 and July 2, and the annular eclipse of the sun is different from the total eclipse. With the moon called the "ring of fire" so you won't see the sun's aura in this eclipse.

It can be seen in the Middle East, Asia, North and Western Australia, and it is seen in Saudi Arabia, Oman, United Arab Emirates, Qatar, Kuwait, Bahrain, India, Sri Lanka, Singapore, Malaysia, Indonesia, Brunei and the Philippines, where the moon will cover about 97% of the entire sun disk, and will not continue in the same region For more than 4 minutes.

The world time will begin at 02:29 and end at 08:05, and the width of the ringed eclipse will not exceed 120 kilometers, from the region along the eclipse path that extends over 8,000 kilometers from the western Pacific to the peninsula. Arabic, and takes from the beginning to the end of 5 hours and 36 minutes .

The eclipse will also be partly seen in areas outside the shadow of the moon as well as in the semi-shadow, including several Arab regions: Egypt, Sudan, Yemen, Iraq, and other parts of Asia: Iran, Turkmenistan, Afghanistan, Pakistan, Nepal, Bangladesh, Burma, Thailand, Vietnam, Cambodia and Taiwan.

Moroccan Initiative for Science and Thought: The beginning of Ramadan 2020 between Saudi Arabia and Morocco

For lovers of scales .. warm weather and stable Friday in most areas