The most dangerous five poisonous snakes in Jordan 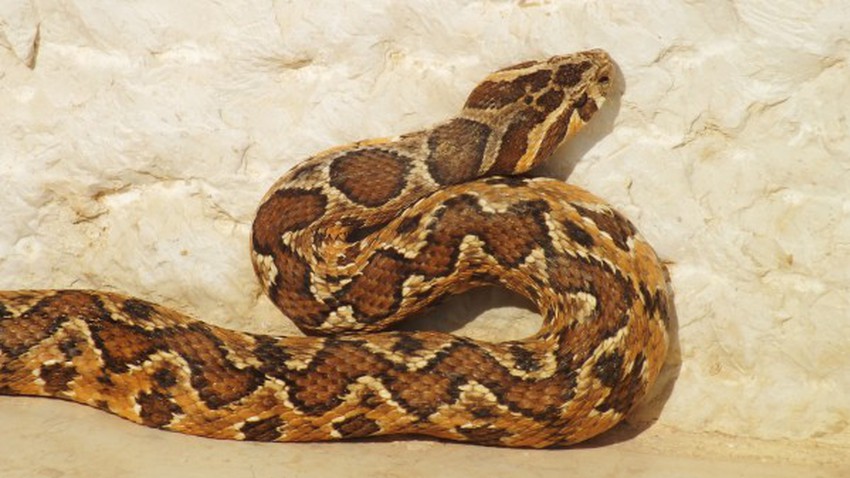 Arab Weather - About 37 species of snakes and snakes have been recorded in Jordan, belonging to seven families, and among these snakes there are (7) highly toxic and dangerous species, due to their having fixed or moving front canines capable of injecting poison into their victims. In this article, we will learn about the five most dangerous snakes in Jordan.

It was called the "Palestine snake" when it was scientifically recorded by British biologists in Palestine in 1938 AD. She lives in Palestine, Jordan, Syria, Lebanon and Cyprus.

It is considered the most dangerous poisonous snake in Jordan, due to the severity of its venom effect, its wide spread in various regions, including inhabited areas, and its ability to climb trees and walls, and is characterized by the enormity of its head and body, and its length reaches up to 130 cm, and its body is full, and its colors are mixed, and it is brown And dull gray with an inverted V on the head.

When and where is the Palestinian snake active?

The Palestine snake is active in the early hours after sunset, but it is also active during the day when it is found in areas with dense grasses and shrubs, especially during the months of April and May, and it is found in the western villages of Irbid, Salt, Ajloun, Amman, Zarqa, Madaba and the Jordan Valley and its farms from the Yarmouk River to the north, until King Hussein Bridge to the south, and its spread is diminishing, as we head south and east, until it ceases to exist in the eastern and southern Badia regions.

In general, the Palestinian snake used to live in open forests, near streams and ponds, and near farms, and its poison breaks down red blood cells, damages the network of blood vessels and causes hemorrhage, and most of the deaths among those who are bitten in Jordan are due to this snake

It is a very poisonous snake, predominantly reddish-brown, and has geometric white spots on its back. It is distinguished by its small head and delicate neck, reaching a length of 80 cm.

Where is sawdust snake spread?

It feeds on rodents, small birds, scorpions and some reptiles, such as lizards. It was found in the southern mountains facing the Dead Sea and Wadi Araba, and in Petra, Tafila, Karak, Aqaba and the Wadi Rum mountains. It was also found in one of the mountains overlooking the King Talal Dam near Jerash, and it is frequently recorded near natural water springs.

Its venom, like its predecessor, breaks down red blood cells and damages the blood vessel network, causing internal bleeding.

The black uraeus also known as the black desert snake, the desert cobra,