The most famous wonderful tourism destinations in the Arab world 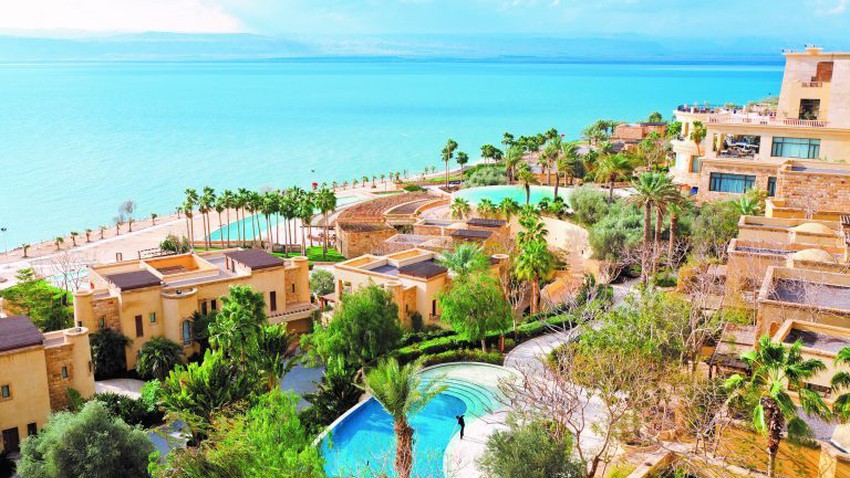 Arab weather - The countries of the Arab world are characterized by the diversity of environments, climates and cultures among themselves, and some countries have witnessed a succession of ancient civilizations that have left traces in them to this day, so the Arab world is experiencing many tourist attractions that make it a destination for all lovers of tourism in the world. In the following, we will highlight the most famous tourist places in the Arab world.

The most famous tourist places in Lebanon

1- Jeita Grotto: Jeita Grotto is located in the Nahr al-Kalb valley, and it is one of the most tourist attractions in Lebanon, and it is called the jewel of Lebanese tourism. Many events and concerts are held in Jeita Grotto, and the visitor can enter the cave on foot through the 120-meter tunnel.

2- Baalbek: It is a beautiful archaeological city located in the north of the Lebanese Bekaa Valley. It is considered one of the most important tourist attractions in the Arab world, as it contains many historical places such as Baalbek Castle, which includes the most important Roman temples and columns built by the Romans, and there are Islamic monuments dating back to the The Umayyad era as a mosque and the shrine of Lady Khawla, daughter of Imam Hussein, in addition to the presence of some Ottoman houses that were built in that era. In Baalbek, the Baalbek Festival is held annually, which hosts Arab and international celebrities to perform concerts at the ancient Baalbek Amphitheater.

3- Faraya: It is a beautiful village that ski lovers flock to, located in the Keserwan district in Mount Lebanon. It is characterized by its picturesque scenery and wonderful nature in which the tourist can feel comfortable and entertained. Faraya is also distinguished by providing all the services and equipment necessary for all its visitors.

4- Cedar forests: They are large forests full of Lebanese cedar trees that belong to the coniferous family and live more than 3000 years. This area is considered a wonderful tourist destination that many tourists come to in the winter, especially to practice skiing.

The most famous tourist places in Egypt

1- Pyramids of Giza: The pyramids of Giza are one of the most important tourist areas in Egypt. It is located on the Giza plateau on the west bank of the Nile. It was built around 25 centuries BC. It includes three large pyramids: Khufu, Khafre, and Menkaure. These pyramids are royal tombs. Each bears the name of the king in which he was buried, and thousands of tourists from all over the world visit these pyramids annually.

2- The Egyptian Museum: It is one of the largest and most famous international museums ever. It is located in Cairo from the northern side of Tahrir Square and is considered one of the first established museums in the world. It contains more than 150 thousand artifacts, including the archaeological collections that were found in the tombs of kings and the royal court of the family. Central in 1894, it also includes a group of monuments that express the stages of ancient Egyptian history.

3- Al-Azhar Mosque: It is one of the most important mosques in Egypt and the Islamic world. It includes a university and a mosque for more than a thousand years. This historical mosque, which is visited by thousands of tourists annually, is distinguished by its archaeological construction consisting of three iwans around the courtyard, the largest of which was the qibla iwan.

4- Khan Al-Khalili: It is one of the neighborhoods of the old city of Cairo, which is considered one of the most important tourist attractions in Egypt, where there are many bazaars, popular restaurants and a large number of cafes, the most famous of which is Al-Fishawy Café, which was founded in 1796. This khan is also characterized by the charm of narrow alleys and legendary crowds Of the people, the wooden benches stacked by the owners of the cafes, and the Egyptian expressions of welcome light in the shade.

The most famous tourist places in Jordan

Jordan contains many historical, archaeological, and tourist attractions. It contains many infrastructures ready to receive tourists such as hotels, roads, transportation, and restaurants. Jordan is characterized by its beautiful nature and the good treatment of its people with tourists. Jordan has many natural springs and sulfur waters that are useful in treating many diseases. Jordan is also distinguished by its geographical location and favorable climate in all seasons. The following are the most famous tourist places in Jordan:

1- Petra: The city of Petra is one of the most important tourist areas in Jordan and the most attractive for tourists. It is a historical city carved into the rocks, built by the Nabatean Arabs more than two thousand years ago to be the capital of their state, and it has remained a witness to the human miracle that brings cities out of the bellies of the mountains. Petra is known as the Pink City due to the color of the rocks that made up its unique and distinctive building.

2- The Dead Sea: The Dead Sea is one of the most tourist attractions in Jordan, and is characterized by its picturesque nature, which is embodied in a sea that has no living creatures in it because of the density of its salts, and its salty waters are used to treat many diseases, and the Dead Sea salts are the raw materials for the production of potash Therapeutic bath salts are used in the manufacture of cosmetic products. The Dead Sea is visited by thousands of tourists annually.

3- Aqaba: Aqaba is located at the head of the Gulf of Aqaba, 360 km to the south of Oman, where the visitor can enjoy the amazing sea world and practice his hobbies in swimming, water skiing, fishing, sailing boats, and other water sports. Aqaba contains many scenic tourist attractions such as the city of golden sands, palm trees, and the most beautiful winter tourist resorts in front of the Red Sea.

4- Jerash: One of the most famous monuments that bears witness to the Roman civilization with a long heritage, and one of the few cities in the world that has preserved all its landmarks to this day. The city’s squares, streets, columns, and archaeological theaters still bear witness to the Greek and Roman eras.

The most famous tourist places in Qatar

1- Doha Corniche: One of the most distinguished tourist and recreational attractions in Qatar, this Corniche extends around Doha Bay, and it is one of the places that tourists use to practice special activities such as walking, skiing, and jogging, and they can also embark on a wonderful cruise in the waters of the Gulf by using boats Wooden roaming on the surface of the water, which indicates the nobility of the city.

2- Aspire Park: This park is located near the Aspire Academy, and it includes wonderful trails for lovers of walking, and it has been provided with many means necessary to practice all sports activities safely, in addition to this, this park is characterized by its green spaces that you will enjoy inside hearing the sound effects that make you feel that you are In a natural oasis, it includes an artificial lake in which some species of animals such as ducks and fish live.

3- The Pearl: The Pearl is one of the most wonderful tourist places in Qatar, and it is a chain of artificial islands located on the northern side of the Doha beach and contains many picturesque seaports, and also has the largest yacht gathering, a number of family restaurants and cafes, in addition to entertainment centers for children. And some malls.

4- Cultural district: It is one of the tourist places that culture lovers go to in particular, where the tourist can enjoy the cultural activities that are held there, in addition to practicing many hobbies such as walking and swimming, and many cultural activities such as art exhibitions are held in this neighborhood constantly. Fine arts, theatrical performances, and heritage festivals, as well as the cultural district includes a number of restaurants that serve the most delicious food from international cuisines.

The most famous tourist places in Tunisia

1- Hammamet area: Hammamet is located in the north of Tunisia, and is one of the best tourist destinations for visitors to Tunisia. It has the old city area surrounded by walls built in the 15th century, and some traditional Tunisian buildings, in addition to the presence of the Great Mosque that characterizes this tourist area.

2- Sidi Bou Said: This city is located on a rocky slope overlooking Carthage and the Gulf of Tunis. It is distinguished by its white buildings with blue windows and doors and black decoration. The houses of this city are designed in a simple design with spacious courtyards. Tourists in Sidi Bou Said enjoy delicious foods and drinks such as couscous and green tea, in addition to the beauty of nature, palm trees and jasmine flowers.

3- Sfax: One of the most beautiful tourist cities in Tunisia, it is located on the Gulf of Gabes, branching from the Mediterranean Sea, west of Tunisia. The city of Sfax was built in the form of a semi-circle, with the old city centered in the middle and the rest of the neighborhoods on the outskirts. This city contains the Sfax International Airport, and a large number of landmarks such as the Diwan Kebab, the Municipal Theater, and the Great Mosque. It is characterized by calmness and distance from noise and congestion.

4- Kairouan: It is the first Islamic city in the Maghreb region, and the center of the power of the Arabic language. Kairouan contains a large number of religious monuments, such as the Mosque of Aqaba, and the Barouta Well, which is distinguished by its fresh water that tourists flock to from all over the world.