The most prominent characteristics of the expected depression on Wednesday 26-01-2022, which is considered the strongest this season 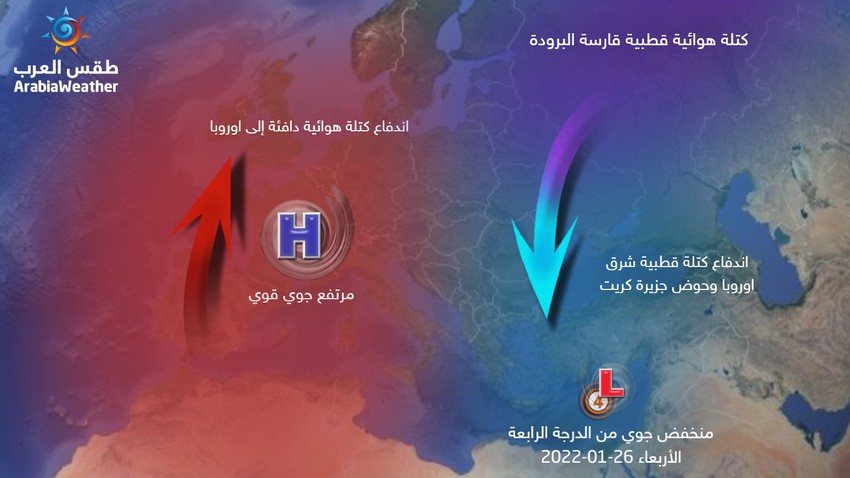 Arab weather - large areas of the European continent are still affected by an air rise in the different layers of the atmosphere, which means the continuation of stable and cold weather in many parts of it, and in conjunction with the concentration of this air altitude, very cold air masses continue to rush and rotate to the east of it towards the Balkan countries and islands Greece and western Turkey, perhaps the last of which contributed to the formation of an air depression - currently affecting the atmosphere of the Levant, including Jordan. Unlike previous reports, this report focuses on scientific analysis and explanation of air maps of the snowy depression expected on Wednesday 01/26/2022.

A stubborn air rise dominates in various layers of the atmosphere over western Europe, starting from the Iberian Peninsula and ending with the British Isles, and at the same time, a polar and very cold air mass rushes with which the same air rise pushes it to fall to eastern and southeastern Europe and the Balkan Basin, and it is formed as a result, God willing. An air depression in the eastern region of the Mediterranean affects Jordan as a depression classified as a fourth degree, with the afternoon hours on Wednesday 26-01-2022, God willing.

The occurrence of stability in the distribution of air masses and air systems from the Atlantic Ocean, the North Pole, and the European continent is a major factor that ensures the continued influx of very cold air masses towards the region, as the regions extending from western Russia in the north to Turkey in the south represent the main nutrient, after God’s will, for the formation of winter depressions in The eastern basin of the Mediterranean Sea, and the current weather maps monitored by the weather forecast cadre at the Arab Weather Center seem to be the strongest and most optimistic throughout this winter. 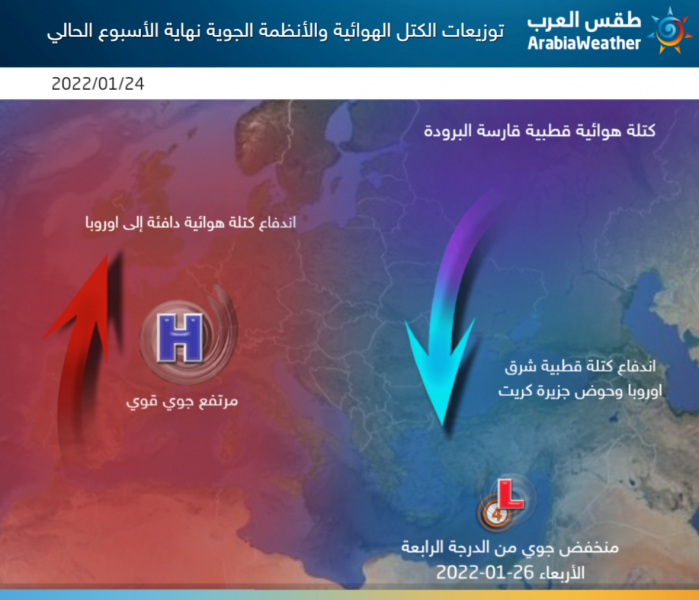 This depression is considered the coldest - so far - during the current rainy season 2022/2021, but will this great cold be enough for snowfalls in the Kingdom and major cities?

The weather forecast cadre answers in Arab weather: “There is an expected deepening of the very cold polar winds that are expected to rush into the eastern Mediterranean in all layers of the atmosphere, which will allow, God willing, the occurrence of large-scale snowfalls that affect many mountainous heights in the Levant, including: This is Amman, Jerusalem and Damascus.

The low air is accompanied by excellent amounts of rainy and snowy clouds, as with the crossing of very cold polar air in all air layers over the waters of the eastern Mediterranean, which are relatively warm, where the temperature difference, God willing, between the sea surface and the high layers of the atmosphere will reach more than 45 degrees Celsius, which means a large force of cumulus clouds accompanying the depression, which also means the occurrence of accumulations that obstruct public life, including mountain heights that are more than 800 meters above sea level, and thus include several areas of Amman and other major cities.

What prevented the classification of this low from the fifth degree?

Despite expectations that snow will fall and accumulate on many heights and major cities in Jordan, and that the weather values and data support, God willing, the Kingdom’s impact on what is known as the “snow” during the expected air depression next Wednesday 26-01-2022, but if compared The depression with snow storms that affected the Kingdom during the past years, such as Storm Alexa, for example, is still the last mentioned in the forefront of strong depressions with advanced classification for its strong effects, which lasted for several days.

Here, Arab weather indicates that the high and low degree of classification of air depressions does not depend on only one factor, and several factors are included in this, including (the total amount of rain in the areas affected by the air depression in the Kingdom, wind speed and its gifts during the period of the depression’s impact, the number of areas that will be covered by the depression duration and period of impact from the beginning to the end of the depression, the temperatures accompanying the depression and how cold it is, and finally snowfall and its quantities).

Archival maps of winter and snow storms that have already affected the Levant, including the Kingdom, indicate how the distribution of air masses on the European continent was, such as Storm Alexa, where the maps indicated at the time, the high flow of the polar air rushing to the Levant (blue color), directly from the Arctic Circle towards The Black Sea, then Turkey, and later to the eastern Mediterranean region, including the Kingdom, where it was placed above us for two days, and the birth of a deep depression that initially centered over Syria, then soon the development of a new air depression centered over the Lebanese territories, which contributed to the strengthening of rain and snow precipitation, This came, God willing, due to the good concentration of the air altitude in the west, central and south of the European continent, and the lack of deepening winter weather storms in the east of the European continent.

How does the air system look after the depression?

It seems that the opportunity exists, God willing, this rest of this month and also the beginning of February for the continued arrival and impact of the Kingdom by air depressions accompanied by very cold air masses that bring rain and possibly more snowfalls to the heights of the Kingdom, where many important areas in the European continent are affected by an air rise in all layers of the atmosphere, For a while, and it is expected to continue during many periods, and this in turn raises the chances of continuing the rush of very cold air masses around this European height of air, towards the east of the European continent and then the Turkish lands and later Bilad al-Sham, God willing.