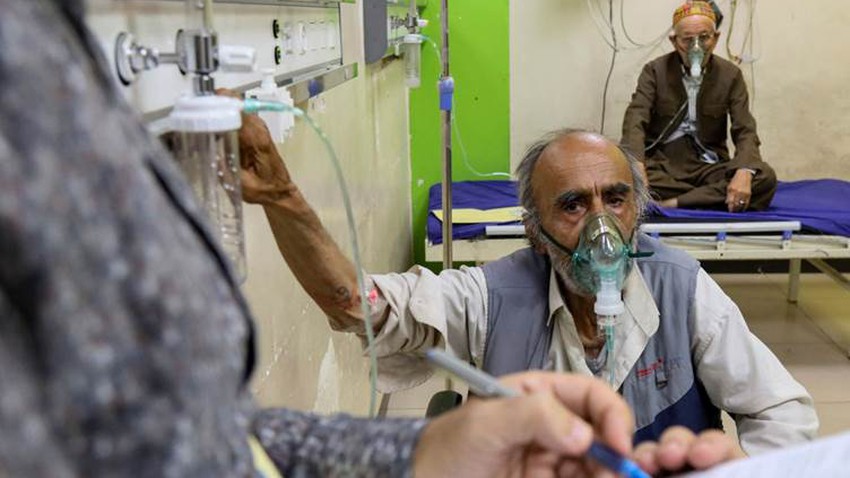 Weather of Arabia - A dense dust storm that swept Iraq and the Kurdistan region resulted in the killing of five people in Tuz Khurmatu in Salah al-Din Governorate, along with hundreds of people who were hospitalized in Erbil and Sulaymaniyah, according to the Rudaw Media Network.

Sherwan Abdul Rahim, Assistant Director of Khurmatu Hospital, said that 21 people were transferred to the hospital today, Friday (April 8, 2022) due to the dust storm, 5 of whom died and others were suffering from stress and receiving treatment due to the density of dust.

In the city of Erbil, the capital of the Kurdistan Region, 222 civilians were admitted to emergency hospitals in the city after suffering from breathing problems caused by the dust storm, according to a statement issued by the Erbil Health Directorate, on Friday, and 45 other people were transferred to the hospital in Sulaymaniyah.

In Kirkuk, 90 cases of suffocation and shortness of breath were recorded in the city's hospitals.

The sky of Iraq and the Kurdistan Region was covered with a thick layer of dust on Thursday, which led to shortness of breath, and reduced visibility, which made driving vehicles very difficult.

Sherwan Abdul Rahim, assistant director of Khurmatu Hospital, described the situation as a "rare incident", and urged people "not to leave the house unless necessary, and to wear masks when going out."

In pictures: Dust storm swept many areas in Iraq

According to Ahmed Hoshyar, there were 89 organized international flights, and they are scheduled to go from Erbil to other countries in the world, 13 of which were to perform Umrah in Saudi Arabia.

Sulaymaniyah International Airport also announced the temporary suspension of its flights due to the dust storm that swept the regions of the Kurdistan Region, but it resumed it later.

A dust storm hit many Iraqi provinces and the Kurdistan Region, on Wednesday and Thursday.

Last month, more than a thousand people were hospitalized with breathing problems in the Iraqi capital, Baghdad, after a heavy dust storm swept through the city.

Climate change is a major factor in the increase in the frequency of dust waves. According to the statistics recorded by the Meteorological Authority, the number of days in which the weather is dusty has increased from 243 days to 272 days annually during the past two decades, and it is expected that it will reach 300 days of dusty weather. annually in the year 2050.

It is noteworthy that Iraq is the fifth country in the world exposed to the effects of climate change, with rising temperatures and water shortages posing a serious threat to the country.

Read also: What are the causes of sandstorms?