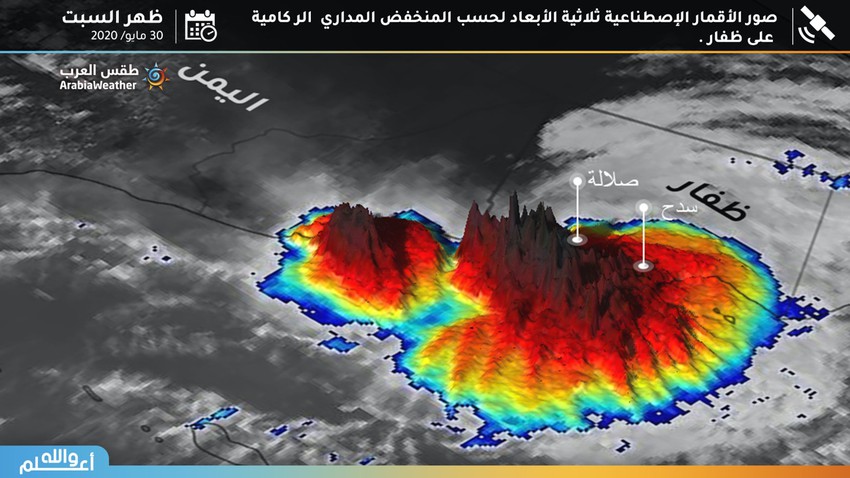 Weather of the Arabs - the phenomenon of the brown impact of hurricanes is an atmospheric phenomenon that works in reverse to what is usual to hear or read about the mechanism of increasing and gaining the strength of hurricanes usually, as it is known that hurricanes originate and develop over warm ocean waters and gain their energy from the moisture and heat of this water Before it weakens and fades away when the ocean waters leave and enter the land.

However, what happens in the phenomenon of the brown impact of hurricanes is the intensity of the hurricane when it leaves the ocean and crosses the land. Therefore, the description of the brown color was launched on it because the factor affecting it this time is soil.

Why does the phenomenon of brown impact of hurricanes occur?

This phenomenon occurs when two elements are available: saturation of the land with rain water before the cyclone's eye leaves the ocean water, and secondly, it is the high temperature of the wet land, these two elements provide more energy to the cyclone than the ocean water provides either from humidity or from heat and thus finds the cyclone waiting for it inside the land A huge amount of energy through which it can increase and evolve instead of weakening and fading.

Among the secondary conditions for the phenomenon of the brown impact of hurricanes to function ideally is the absence of mountains and terrain within this land, because mountains, plateaus and uneven terrain in general operate the work of air fenders and impede the bypass movement of the hurricane inside the land.

Where did this phenomenon happen before?

This phenomenon is not common, and it is rare to occur because it needs the ideal conditions in order to be realized, because hurricanes always before entering the land work to lose this land to heat due to cloud cover and also heavy rains, so how does the Earth maintain its temperature despite the cloud cover and rain showers?

The answer to this question is simple, that the hurricane pulls hot winds from a far area to cross over the wet land that the hurricane will cross and thus achieve the condition of heat and humidity, and this happened on more than one occasion.

Hurricane Allison, which struck the United States of America in 2001, specifically the state of Mississippi, as the hurricane intensified as soon as it entered land and with it more rain showers than it was over the waters of the Gulf of Mexico.

Tropical Storm Alberto also struck the United States of America, where it intensified over land and continued to move within the territories for 3 days until it reached Lake Huron, which is the second largest lake in the Great Lakes of America and thus this storm is the first storm to succeed in reaching the lake in history, thanks thanks To the phenomenon of ocean brown influence.

The last example is the most recent and closest to us, which is the tropical depression that struck the Sultanate of Oman and eastern Yemen on 5/29/2020, where the air depression was characterized by a very slow inside the waters of the Arabian Sea, but its strength increased when it entered land from the side of the city of Salalah, Oman, bringing With him huge amounts of rain exceeded 600 mm, and due to the occurrence of this phenomenon during this depression is the withdrawal of the air depression of a hot air mass from the Empty Quarter towards the Sultanate of Oman at a time when these areas were experiencing significant precipitation, and once entering the center of the low land, he found heat and Sufficient moisture to tighten rather than fade.