The probe `Dart` is collided with an asteroid in space, announcing the success of the first defense test for Earth 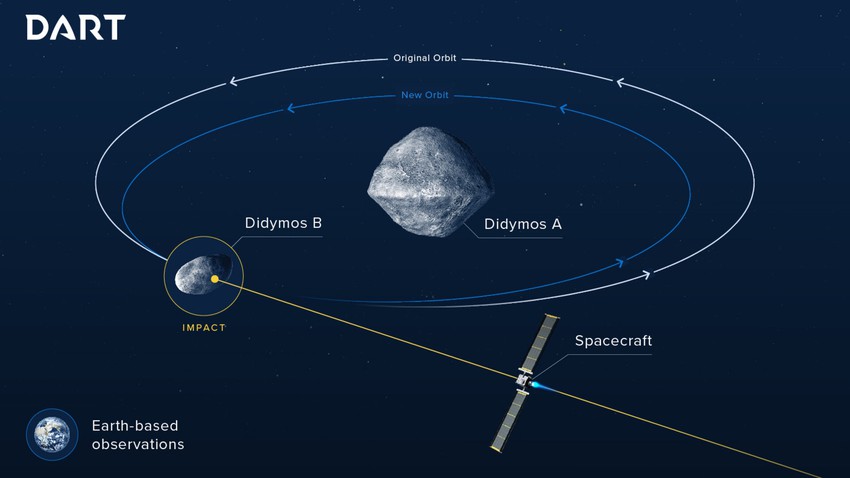 Weather of Arabia - NASA's "Dart" probe collided with an asteroid, destroying itself, on an experimental mission to find out the extent to which it is possible to prevent a large rock in space from colliding with the Earth, by diverting it from its course.

The probe's camera transmitted live images of the mission (at a frame rate per second) up to the moment of impact.

Did you catch the #DARTMission stream live or Didymos it? Impact is over, but the research continues. As scientists delve into data and telescopes release images of the asteroid from their POV, follow @AsteroidWatch and @NASASolarSystem for updates. https://t.co/ZNEYDQVA8Y pic.twitter.com/dn2veS6zbG

For more: To save Earth from a devastating asteroid .. "NASA" launches the "DART" vehicle on an experimental mission

The target was a 160-meter-wide asteroid called Demorphos, and this test took place in space about 11 million kilometers from Earth, as the 570-kilogram "DART" probe collided with the asteroid, at 23:14 GMT on Monday. Telescopes monitored this from afar, including the new hyperspace observatory known as James Webb.

NASA says that "the rock is not currently on its way to impacting the Earth, and the test will not cause it to accidentally change its direction to head towards Earth."

How will this idea protect Earth from a real killer asteroid?

NASA's idea is simply to collide a spacecraft with an asteroid to change the speed of the rock by a small amount and change its course, so that the Earth misses, provided that this is done at a sufficient distance and time in advance.

Dart's twin asteroid redirection test mission verifies this theory by almost directly colliding with the 160-meter-wide Demorphos at a speed of more than 20,000 kilometers per hour.

This should change its orbit around a much larger asteroid, called Didymus, by just a few minutes each day.

"The DART mission is the first planetary defense test mission to prove the effectiveness of a spacecraft collision with an asteroid in order to move its position very slightly in space," said Dr. Nancy Chabot, who works in the Johns Hopkins University Applied Physics Laboratory, and is leading the NASA mission.

She added in an interview with the BBC: "This is what you would do years ago, if you needed, to give the asteroid a small push to change its position in the future so that the Earth and the asteroid are not on a collision course."

How did the probe "DART" accurately determine its target?

Beating Demophos was the big challenge. The DART probe can only distinguish its target Demorphos from Didymus, which is 780 meters wide, only in the last 50 minutes or so. 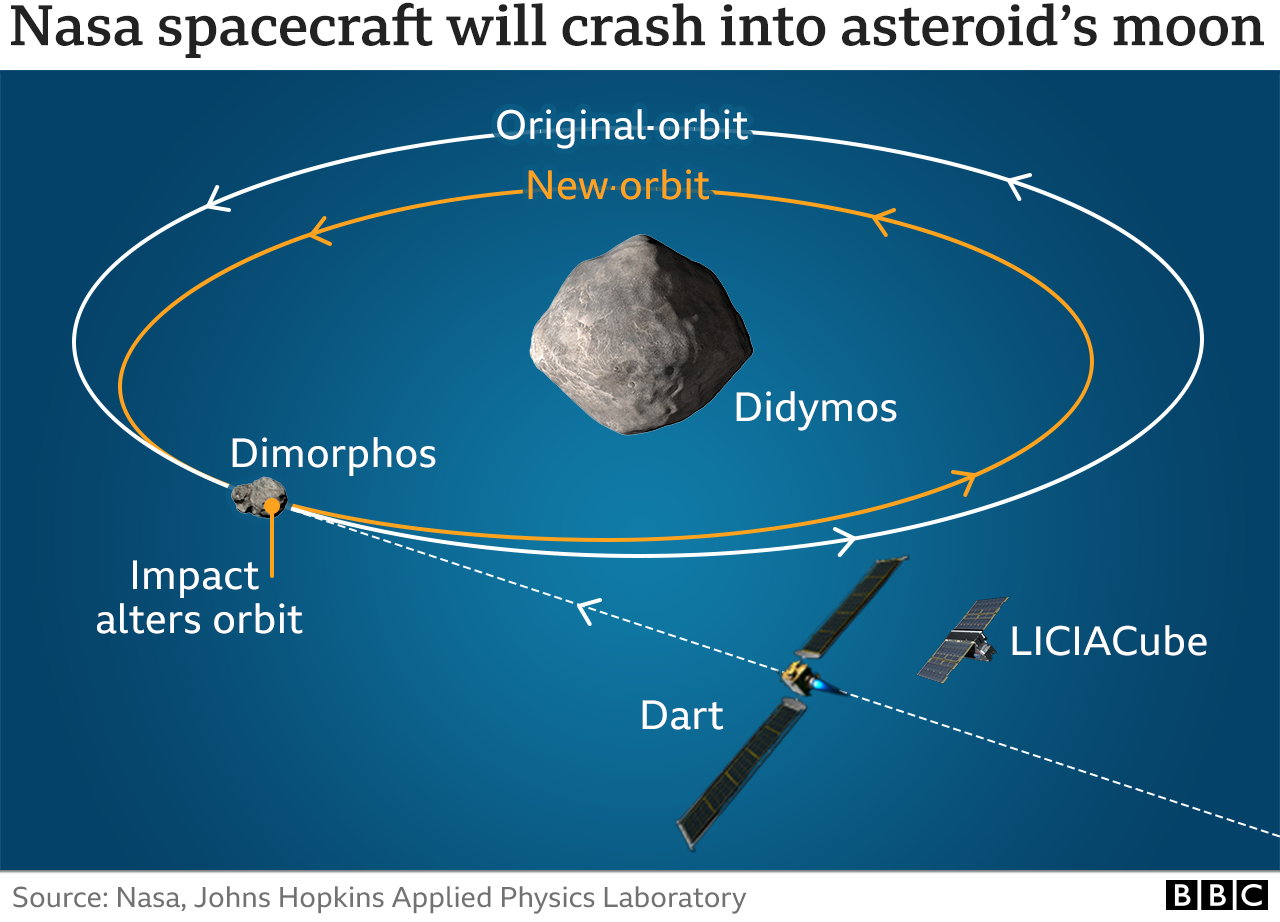 "Because of the speed of light and the distances involved, it's not really feasible to have a pilot sitting on the ground controlling the spacecraft," said Dr. Tom Statler, a NASA Dart program scientist. "There isn't enough time to respond."

"We had to develop software that could interpret the images taken by the spacecraft, figure out the correct target and perform trajectory correction maneuvers by firing the thrusters."

Dart sends images back to Earth at a rate of one image per second as it heads toward the target. That initially appeared as a point of light in the images expanded to fill the entire field of view, before the feeding was abruptly cut off as the spacecraft was destroyed.

Fortunately this is not the end of the story. It carried with it an Italian cube satellite weighing 14 kg, which was launched a few days ago. His job is to record what happens when DART digs a hole in an asteroid. (Image below is illustrative) His images, taken from a safe distance of 50 km, will reach Earth in the coming days.

"The satellite" Lyciacube" will pass about three minutes after the Dart collision, "to document what happened and confirm the deflection of the asteroid's orbit," said Simon Perotta, who works at the Italian Space Agency.

It currently takes Demorphos around Didymus approximately 11 hours and 55 minutes. The collision is expected to change the momentum of the smaller object, reducing the orbital period to about 11 hours and 45 minutes. Telescope measurements will confirm this in the coming weeks and months.

The threat is that if an object like Demorphos hits the ground (which won't happen), it could dig a hole perhaps one kilometer in diameter and a few hundred meters deep. The damage will be severe in the vicinity of the impact.

Four years from now, ESA will have three spacecraft - collectively known as the HERA mission - to engage with Didymos and Demorphos and conduct further follow-up studies.