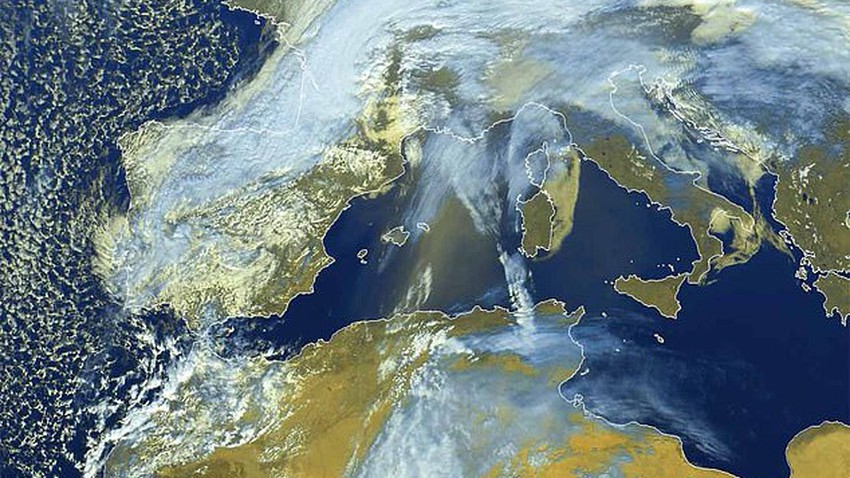 Arab Weather - In a rare historical event, sands traveled from the Sahara desert for thousands of miles from Africa to make their way through Europe, and the white snow turned to orange, as a sandstorm swept over several parts of Europe yesterday, and the column of dust spread in the air to leave a frightening shade of color Yellow in the sky.

(Photo of an orange spread in the Chamonix Valley of Mont-Blanc in France as the air was laden with sand dust from the Sahara Desert) Source: Dailymail.co.uk

The strong winds in Africa caused sand to be carried from the Sahara Desert (the Algerian Sahara in particular), and swept through Europe before reaching the Alpine ranges and settling on the snow. La Fouly in Val Ferret, Switzerland, is dotted with African sand.

(Photo of skiers hitting the slopes on the La Fouly ski run in Val Ferret, Switzerland, and scraping the orange sand with their skis, despite the strange weather phenomenon and the continued flow of dust from the African Sahara) Source: Dailymail.co.uk

(A picture of a ski truck moving on the orange snow in Sestriere, in the Western Alps, Italy, near the French border, described as a view from Mars) Source: Dailymail.co.uk

France's National Weather Service and Climate Service has released a satellite image showing a view from space of sand from the Sahara desert advancing towards Europe, as the low-pressure system in the Iberian Peninsula in Europe causes a strong southern wind flow that brings sand from the African Sahara. To continental Europe.

(A satellite image showing desert sand in yellow between the Balearic Islands and Sardinia) Source: Dailymail.co.uk