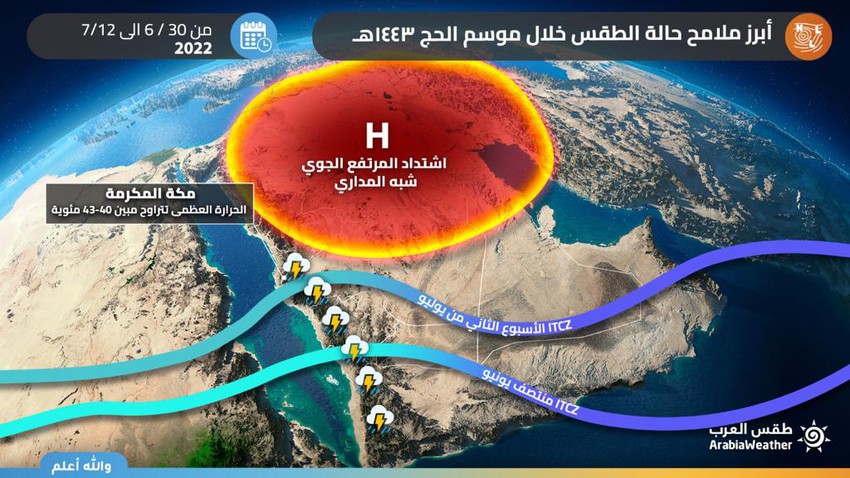 Arab weather - The promising indicators continue to enter the southwestern sector of the Kingdom, especially the highlands, with a wet and rainy period, especially during the second week of July and during the Hajj season 1443 AH.

In the details, the computer modeling outputs indicate expectations of a gradual change in the air systems in the first week of July in favor of southwestern Saudi Arabia, especially the mountainous highlands, and these changes are represented by the improvement in the chances of rain clouds forming on the heights of Jazan and Asir, and their extension less sharply towards the heights of Al Baha, Taif and Sharq Mecca.

Gradually during the second week of July, which coincides with the Hajj season 1443 AH, the rains intensify and the intensity of thunder clouds increases on the southwestern highlands of the Kingdom.

The reason for these predictions is due to the positioning and dominance of the semi-tropical high air over the north of the Arabian Peninsula, which allows an additional rush of moist seasonal winds from tropical regions of the African continent that are needed for the growth of thunder clouds, in light of the absence of high air in the upper layers of the atmosphere, and stimulated by Belt (ITCZ).

However, it is not possible to finalize the details of the expected unstable weather during the Hajj period, given the relatively long period of time and the wide margin of error from now on.