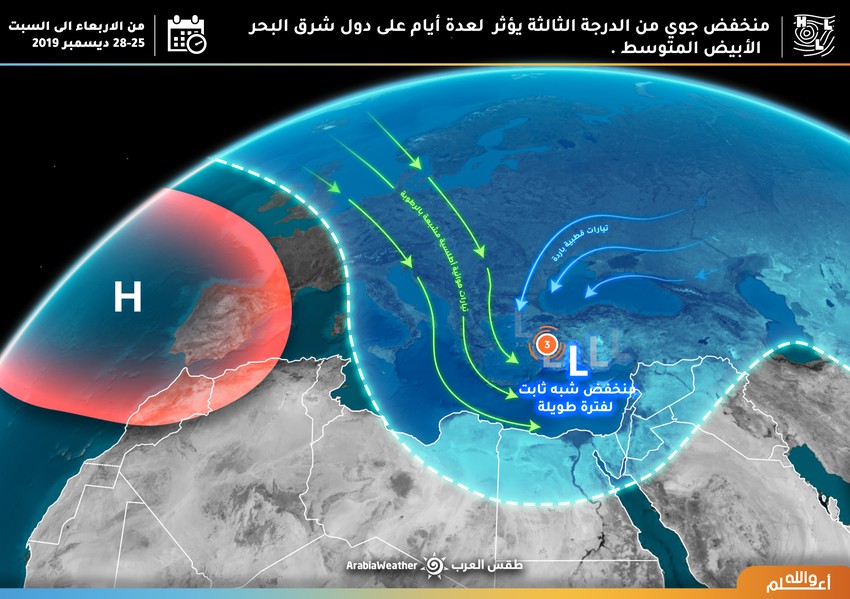 Temperatures drop between 3-4 degrees Celsius to prevail in cold weather in most areas:

Temperatures decrease significantly over most regions of the country, with cold weather prevailing on the northern coasts, delta and Cairo, and relatively cool over central and southern Upper Egypt, while it is cold on most areas at night, very cold on the highlands and desert areas.

The low depression continues to affect Egypt with thunderstorms, with chances of torrential rains as snow falls on Saint Catherine:

The country continues to be affected by an air depression centered on the island of Cyprus, accompanied by a cold upper basin, whose impact is expected to continue until the end of the week and the beginning of next week. From the formation of torrential rain in some regions of North Sinai and parts of the northern coast, there is also an opportunity for snowfall on the mountains of St. Catherine, and then the rain falls to concentrate on the northern coast, especially the northeastern coast, with the movement of the depression towards the Levant Turkey.

Active winds to strong speeds that raise dust and dust, especially on the north of the country, up to the storm in northwest Egypt:

Accompanying the weather with active western winds to strong speed, causing dust and dust in some areas of the north and central of the country, it may reach the dust storm on parts of the northwestern coast. Wind activity increases the feeling of lower temperatures on these areas.

The state of Bahrain, white and red, during the case:

The sea is disturbed and the waves rise due to the active winds that accompany the depression, which limits the traffic and most of the marine activities on average, while the state of the Red Sea is moderate and suitable for most marine activities.

You can see more accurate details regarding the monthly newsletter, including rain forecasts and weather systems in Egypt, by joining the distinct package available through the Arab Weather app.