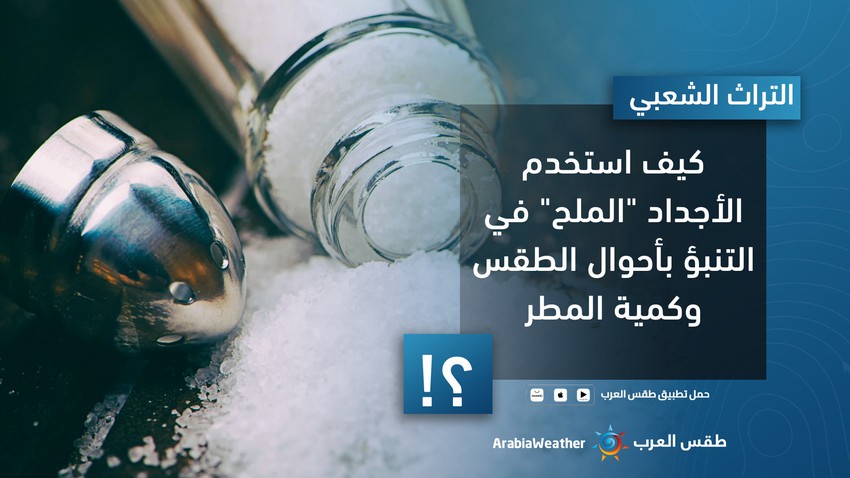 Weather of Arabia - Although our ancestors did not know the satellites nor the numerical models used in the modern era, this did not prevent them from inventing unique and “strange” means to predict weather and weather conditions, which may seem just myths that contradict modern science, even if they sometimes hit .

One of these methods is the use of "rock salt" to find out the state of the climatic year in terms of the amount of rain.

When searching for the details of this method, we find that there is a discrepancy in the hadiths spread about this weather between different countries, and in the number of salt heaps and the timing of their placement. We review the different methods in the following lines.

The method of "impregnation" in the month of August and September

Some farmers were waiting for the first six days of August, which are known as the “six verses” because they believed that the amount of dew that falls each morning on these days is related to the amount of rain in the coming season, and the equation is simple: “The more dew… the more rain, and vice versa. ".

The farmer continues to monitor the “dew” and other indications until the end of September, devising creative ways and means to predict the amount of rain that is likely to fall throughout the year, and even bet that he can know which months in particular will have more rain through “impregnation”!

Dr. Ahmed Al-Sharida (a researcher in climate and the eastern agricultural cultural heritage) refers to a number of controls for conducting this ritual, such as setting a date for it, which is the night of September 22 (the night of the autumnal equinox). The surface of the basalt stone that is not affected by moisture. As for the grips, it will be - according to the researcher - 8 grips, each grip one winter month, as follows: October, November, December, January, February, March, April, May. 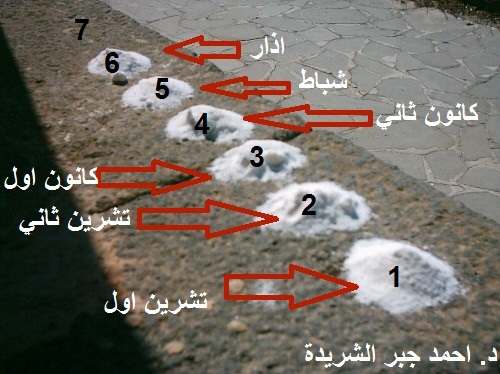 And when they wake up in the early morning to see the little salt sparrows, they start counting from the fist of the first month, i.e. October, and so on.. If one of these fists changes color and water flows, then it is a month of abundant winter. Through the water in or in front of the salt.

If the fists are all a little wet, then the year is sweet, in other words the piles of salt are watched before dawn the next day (and if the salt is solid, the cold is bitter, and if the salt has melted, the month hides abundant rain, and if the salt does not change, the weather will be clear).

This custom is very old and has been inherited socially and culturally for hundreds of years, according to Dr. It is subject to several conditions, which are:

It is noteworthy that peasants and farmers in the Koura District in the Irbid Governorate in northern Jordan have adopted many methods by which they know the weather conditions, which may sometimes extend to a whole year to help them in planting and harvesting the crop, where some are still interested in them, and our ancestors used them before the existence of satellites and analyzes Climatic, weather stations were often hit.

According to Dr. Al-Sharida, due to the changes that occurred in the climate in the time of the ancestors and the changes taking place today, this annual climate tradition has declined, as the period of the sixties and seventies differs from the current era; Due to the absence of the phenomenon of climate change and global warming at the time.

Is this method scientifically correct?

Because of the importance of weather and its impact on all areas of life, our ancestors contemplated almost everything that could help them predict weather conditions and sought to invent ways and stories and did not stop meditating, and these experiences (whether believed or not) indicate the creativity of ancestors in the absence of technological means and devices Advanced monitoring, which is also not always believed, but at least it is based on a scientific basis, and we must always search for other complementary or auxiliary means for meteorological observations, to develop this science and harness it to serve and protect humanity.