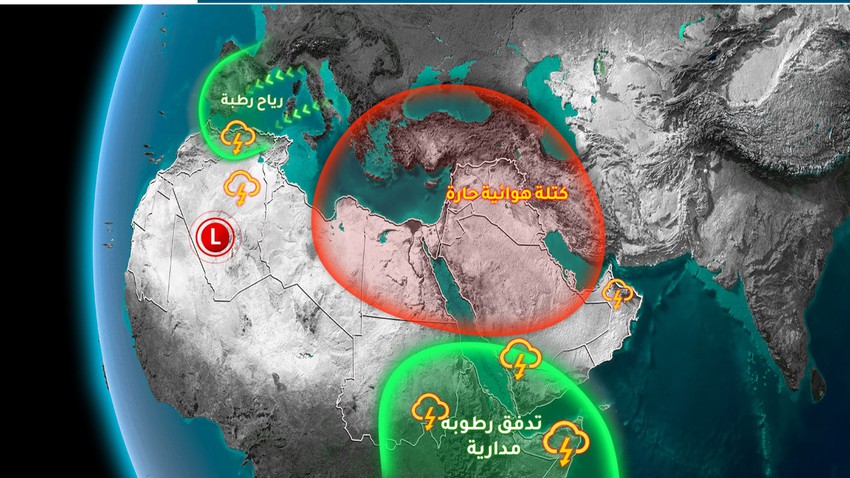 Weather of Arabia - the weather systems are distributed this week in the Arab world between hot weather in the eastern part of it and moderate humidity in the western part of it, as an air high is concentrated in the middle of the Mediterranean that pushes hot winds towards the eastern side of the Mediterranean, while the countries of Morocco are affected by conditions Unstable weather due to the continuing effects of the desert depression and the associated humid eastern currents on parts of the Maghreb countries.

Countries of the Maghreb

A desert depression and a humid easterly winds

The desert depression continues to form over the Algerian desert, and it continues to push moist eastern currents from the Mediterranean towards most areas of Algeria, Tunisia, northern Morocco and parts of western Libya throughout the week, and clouds multiply, God willing, at different heights, becoming cumulonimbus thunder, and these weather conditions are concentrated. Stable in the northern and coastal regions, and the rains are sometimes heavy and accompanied by showers of hail at times.

Moderate winds blow with active gusts sometimes during the week, as these winds raise dust and dust and thus reduce the horizontal visibility in some areas.

The Levant, Egypt and Iraq

An air system with high air pressure prevails in the Levant region, where the weather is stable all days of the week with activity in the speed of the western winds over the Levant and Iraq, and the atmosphere is stable throughout the regions of the Levant and Egypt, while the opportunity is ready for showers of rain on parts From Iraq, especially the northern ones, during the first half of the week.

A hot air mass is pushing towards the eastern basin of the Mediterranean and Iraq, working on a gradual and tangible rise in temperatures, so that a hot and summer atmosphere prevails in most regions throughout the week, as the temperature is forty in most regions of Egypt, the Jordan Valley and the Dead Sea regions in Palestine, Jordan and all Iraqi regions. While in the thirties in most areas of Palestine, Jordan, Lebanon and Syria.

Unstable and very hot weather in the Arabian Peninsula

A state of air instability continues to affect western and southwestern Saudi Arabia during the week, with its intensity gradually decreasing, while the opportunity is presented on Sunday to include rains in parts of the northern eastern region of the Kingdom of Saudi Arabia and Kuwait, while the chances of rain continue to rain in parts of Yemen, the Sultanate of Oman and the UAE in a steady manner. Daily noon and afternoon hours.