The weekly newsletter for the Arab world ... Air heights in the western Mediterranean and a cold mass towards Iraq 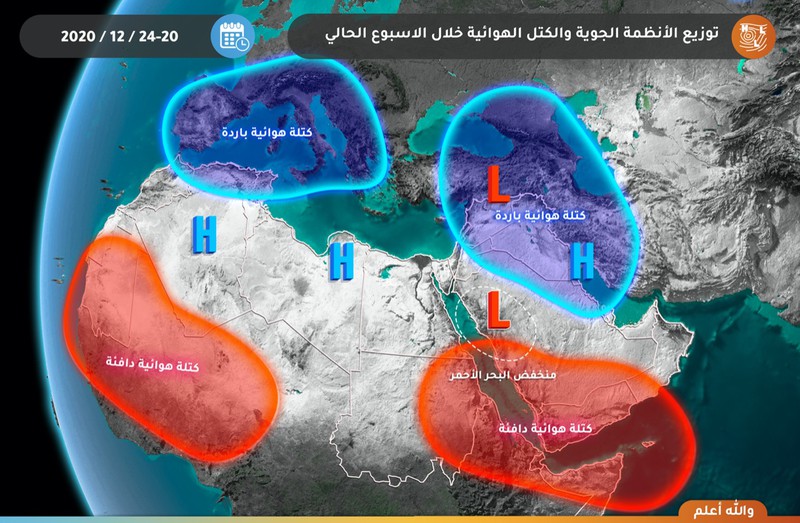 Weather of Arabia - It is expected that the air systems will be distributed this week throughout the entire area of the Arab countries between two air highs and a shallow air depression over northern Libya and the Red Sea depression, and two cold air masses, one in the middle of the Mediterranean and the second over Iraq, the Levant and northern Arabia.

A cold air mass is concentrated in the high layers of the atmosphere above the central Mediterranean and extends south towards Libya and Tunisia, where it works to create unstable atmospheres and showers of rain that are thunderous and heavy sometimes on Sunday and Monday, especially on the coasts of eastern Tunisia and northwestern Libya, before the air stabilizes Again during the second half of the week.

Weather stable in Morocco and Algeria most days of the week

Sporadic showers of rain will fall in northeastern Algeria on Sunday before an air height extends and the chances of rain will decrease, starting on Monday, as this stable but cold weather continues throughout the week.

Weather stable in Egypt and Sudan throughout the week

A stable atmosphere prevails throughout the current week in Egypt and Sudan, and temperatures are around their averages for such a time of the year, but as of Wednesday, temperatures are lower in Egypt due to the crossing of a cold air mass in the eastern Mediterranean, crossing quantities of low clouds.

As for Sudan, despite the stability of the atmosphere in all regions, the opportunity remains ripe for thunderstorms of rain on the coasts and Port Sudan on a daily basis.

An air system with high air pressure prevails in the Levant region, where the weather is stable during the beginning of the week with activity in the speed of the eastern winds over Jordan and Syria, but as of Wednesday, a cold air mass crosses, and temperatures decrease and showers of rain fall on both Syria and Lebanon And Palestine and Jordan, these precipitation are snowy over the high mountain peaks in Lebanon.

Unstable weather conditions prevail during the week in northern Iraq, showers of rain of varying intensity fall from day to day, snowy peaks above the clear high peaks, while the weather is stable in the center and south of the country.

A very cold air mass rushes towards the country coming from Turkey during the second half of the week, as temperatures drop, and the opportunity becomes ready for showers of rain in all regions on Wednesday and Thursday, with snow in the northern regions.