Arab Weather - At this time, three years ago, the Arab Regional Weather Center created an indicator to measure the severity and effectiveness of air depressions, with the aim of making it easier for citizens to know the strength and impact of the depression and how to deal with the weather situation. According to the severity and degree of atmospheric depression and its effects on the atmosphere.

Degrees of intensity of depression 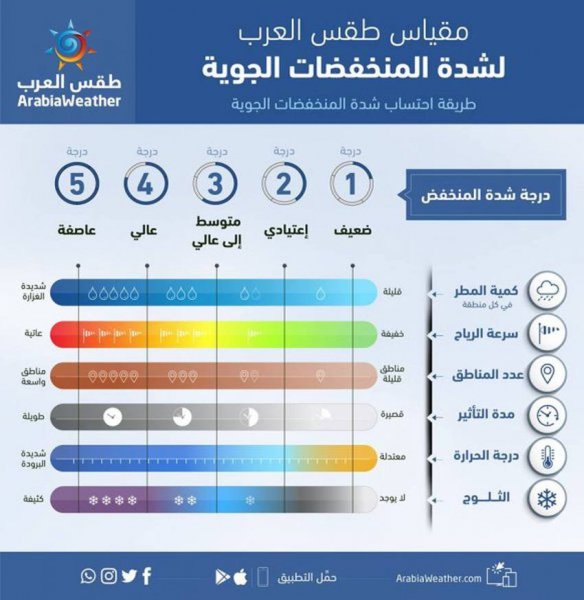 The depression is classified according to the innovative Arab weather index into five degrees for each degree of classification and specific severity, which are:

It includes first - class air Depressions weak influence and associated small amounts of rain, so that the effects of depressions classified as first class in the form of lower temperatures and some activity on wind speed and precipitation of rain showers scattered in limited areas.

The second degree includes the normal winter air depressions. It is natural for the Kingdom to be affected by an air depression that brings a clear decrease in temperatures and precipitation in different regions with activity on wind speed. The second degree of depression calls for issuing important recommendations because of their association with some dangerous weather phenomena.

The third degree includes atmospheric depressions whose intensity ranges between medium and high efficiency, so that the amounts of rain are greater and the temperatures are lower and are accompanied by a high abundance of rain, which necessitates issuing serious alerts because of the association of these depressions with weather phenomena that are more severe than those accompanying the usual depressions.

The fourth degree includes the highly effective atmospheric depressions, which are accompanied by effects closer to the effects of the storm, bringing strong winds and heavier rains. This degree is considered the least influential on the Kingdom, but it is characterized by its high danger and its clear effects on the aspects of public life that lead to its obstruction.

The fifth degree is the last degree in the indicator of measuring the intensity of atmospheric depressions, so that this degree includes exceptional storms, whether they are winter or snowy. The fifth is to impede all aspects of public life and the various state agencies, and it is mentioned that the Kingdom, since the establishment of the classification, has not been exposed to any air depression of the fifth degree.