Thunder snow .. one of the amazing weather phenomena 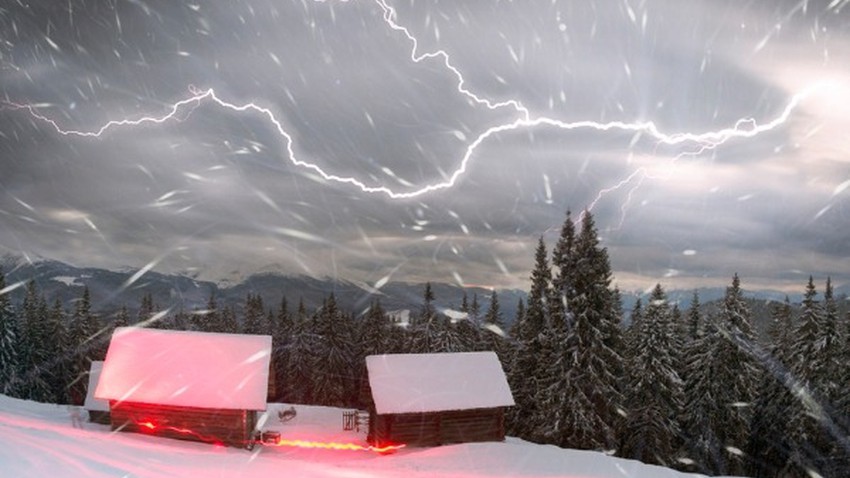 Arab Weather - It is not usual for lightning and thunder to occur during snowstorms, but the snowstorm that the region witnesses today provided us with an opportunity to witness one of the rare weather phenomena called " Thundersnow ", where the snowfall is mixed with the sound of thunder and the glow of lightning, which is an event Many weather buffs are excited.

Thunderstorm is a rare event because it can only happen during certain months and under certain circumstances.

How do thunderstorms occur?

Storms need upward air currents and moisture to generate lightning, as the generation of thunderstorms requires a state of instability in the atmosphere, so that this state acts as the engine that forms the rising currents, and then the particles in the rising currents collide with the descending particles, they become Loaded with charges, negative charges collect at the bottom of the cloud, and smaller positive particles collect at the top, and when charges accumulate in the cloud, they are discharged in the form of lightning.

Why is thunderstorm a rare event?

Often the usual snow fronts lack the factors that lead to the instability necessary for the occurrence of snow thunder, but these conditions may be available in the snow resulting from fronts coming from water bodies, when cold air blows over warmer waters, forcing the air to rise to the top.

And usually thunderstorms do not generate more than some lightning, unlike other thunderstorms that are capable of generating many lightning, and often the snow thunderstorm is not able to generate lightning until stimulation occurs due to the passage of an aircraft near a cloud loaded with charges.

And usually snow thunder strikes areas near large bodies of water such as Japan and Finland, and some mountainous areas such as the Palmer Mountain in central Colorado, where the winds tend to rise when they encounter the mountains, which leads to the emergence of an upward current that forms thunderstorms.

Thunder snow may be a problem for airplanes because it is unpredictable, although planes are designed to withstand lightning strikes, but the presence of planes in the place where snow thunder forms can pose a danger to people on the ground, because airplanes cause lightning strikes to reach the ground. Also, people usually do not expect lightning to occur during snowfall, and thus are more vulnerable to lightning strikes due to lack of caution.