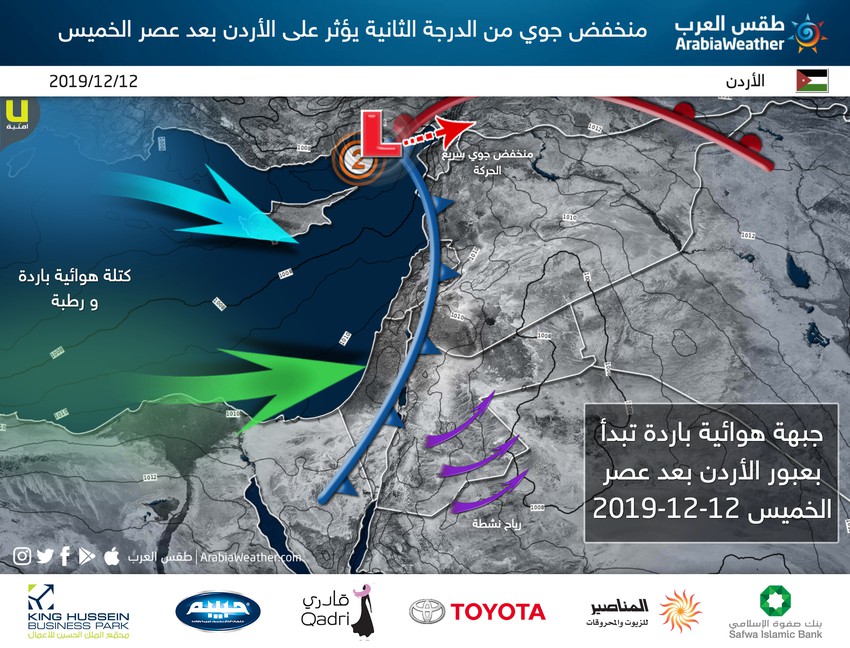 Thursday: Stable weather during the day and low pressure CAT 2 with rapid impact in the evening

ArabiaWeather - The Kingdom will be affected starting from the afternoon hours of Thursday, with a fast moving air depression, and it is classified as CAT-2 (the usual degree), according to the indicator measuring the intensity of air depressions, which is innovated by ArabiaWeather.

In detail, the weather is expected to start on Thursday, generally stable, with the appearance of medium and high clouds, and gradually activate the speed of the southwestern winds, which may cause some dust. And as we enter in the afternoon and evening hours, the so-called cold air front begins to cross the Kingdoms airspace, so that the convective clouds will increase and the temperatures decrease significantly and the weather turns cold and cloudy and rainy, God willing in the north and central of the Kingdom, accompanied by thunderstorms and hail showers. It is feared that flash floods could happen and valleys run in foothills and mountain slopes during the crossing of this cold front, as a result of expectations of a high rate of heavy rains at the time.

Later during the night and with the dawn hours, after the completion of the cold front crossing, the chances of rain begin to decline rapidly, the air activity weakens and remains concentrated in the far northern regions of the Kingdom.

It is expected that the weather will gradually settle on Friday.