Thursday | The Kingdom continues to be affected by a second-degree depression, with heavy rains and strong winds 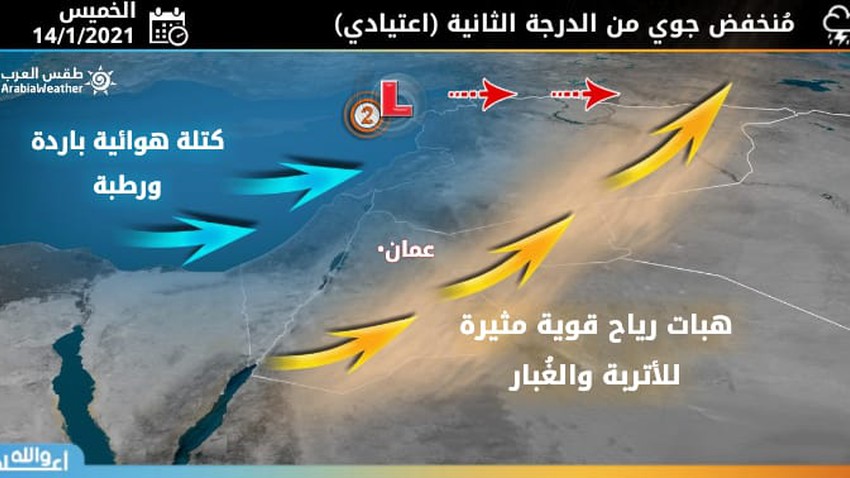 Arab Weather - Temperatures drop clearly during the hours of the day on Thursday, and the weather is relatively cold in general, with sporadic showers of rain continuing in some regions, especially in the morning hours, especially in the northern regions, but most regions of the Kingdom will be free of rain in The first part of Thursday, with the exception of parts of the northern regions, and the winds will be southwesterly, moderate to brisk, and causing dust and dust in the desert areas.

The actual effect of the depression begins during the afternoon hours, with the arrival of rain in the central regions in the evening and at night!

The kingdom's impact begins with the actual impact of the depression during the afternoon and afternoon hours, as the rains begin to regularize again starting from the north of the Kingdom, gradually extending during the evening and night hours towards the central regions, including the capital Amman, and it is weakly likely to affect some rain showers in the southern regions. The rains will be of varying intensity and heavy at intervals in some areas, especially the northern ones.

This coincides with the blowing of moderate to active southwesterly winds, accompanied by strong gusts of up to 70 km / hr in some areas, especially the desert ones, which cause dust and dirt and may form dust waves in those areas.

Significant drop in temperature at night as rain continues

Night temperatures decrease in an additional way during the hours of Thursday / Friday night, as cold weather prevails in all regions, which turns to very cold later in the southern desert and the mountain highlands, with the continuation of rain at intervals in some parts of the north and center of the Kingdom, and the winds will be moderate to westerly Speed active.