Tonight | The decline of the air depression and a wide wave of ice permeates large areas of the Kingdom, including the capital, Amman 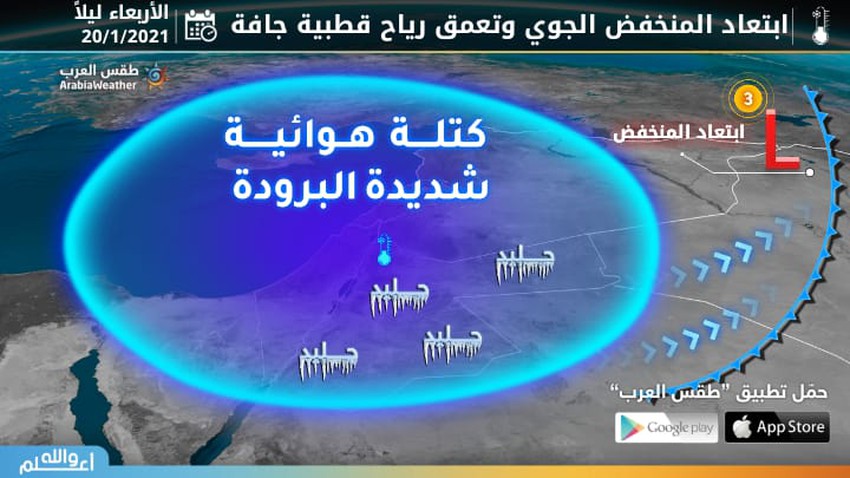 Weather of Arabia - The Kingdom has been affected since yesterday evening by an air depression classified as a third-class depression, which brought rain, strong winds and showers of hail, as it fell and snow accumulated over the high mountain heights, it was in the form of melting snow in the rest of the mountain heights, the updated readings indicate a decline The air depression during night hours from all regions of the Kingdom, so that the chances of rain and snow over the mountainous heights recede, and the weather returns to stability again.

Dry polar winds deepen behind the depression, causing a strong wave of ice!

The polar mass deepens after the "departure" of the depression, which leads to the bursting of very cold but dry air currents in the lower atmosphere, which leads to a drop in temperatures to zero degrees in many regions, and temperatures are below zero degrees Celsius. By 4.5 degrees Celsius in the southern and eastern Badia and the upper Sharah Mountains, with extensive formation of ice and frost in large areas of the Kingdom early at night.

It is also expected that the so-called frozen fog will form in the southern badia, and frozen fog is an atmospheric phenomenon that occurs when fog forms and the air temperature drops below zero degrees, which leads to the transformation of the water crystals that make up fog into frost and ice on the surfaces.

1- Attention by farmers, livestock keepers and residents of hair houses from the risk of ice and frost formation, and temperatures below zero degrees Celsius.

2- Driving with extreme caution on the roads, especially in the early morning hours of Thursday, due to the formation of ice.