Tragic accident: At least 22 people froze to death after being trapped in heavy snow in their cars in the Pakistani town of Morey 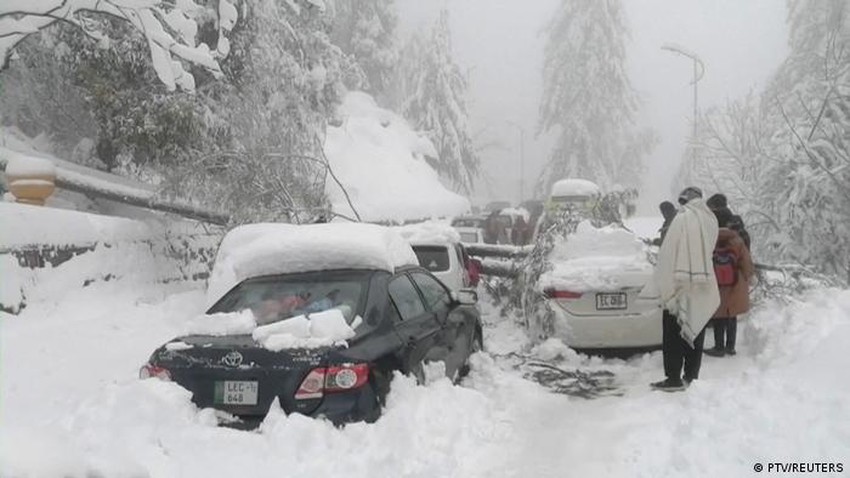 Weather of Arabia - In a tragic event in Pakistan on Saturday, at least 22 people were killed after they froze to death in their cars surrounded by heavy snow, as tens of thousands of visitors gathered in the Pakistani town of Morey with the intention of enjoying the snowfall, but it was the end for some of them.

On the cause of death, the "Jews" channel quoted Raja Rashid, an official in the town's police, as saying that "most of the people who died in Morey did not die from the cold, but because they left the heating devices inside their cars turned on and slept," and added: "The fumes of the heating devices killed them." .

During the past 24 hours, the town of Morey witnessed heavy snowfall, and all roads leading to the city were closed due to traffic congestion, which led to the stranding of thousands of cars.

Interior Minister Sheikh Rashid Ahmed said in a video message that the tourists who are visiting the region in large numbers for the first time in 15 to 20 years have caused a major crisis.

More than 100,000 vehicles have entered the city, located 70 kilometers from the Pakistani capital, Islamabad, in the past three days, a spokesman for the Morey police announced, causing a traffic jam.

Despite warnings from the authorities, visitors flock to see the unusual snowfall in this small tourist town that is so loved by the capital's residents.

Punjab Provincial Government Chief Minister Osman Buzdar declared Morey a "disaster", urged residents to stay away from it, and imposed a state of emergency in hospitals, police stations, administrative offices and rescue services.

The following are videos published by the media, which showed dead people inside their cars that were covered in snow, as well as other cars in the streets that were completely covered with snow.

#Pakistan : At least 21 people froze to death in cars stranded in snow amid a glut of tourist influx in Murree, Pakistan. Around 1,000 cars were stuck on the hill station. pic.twitter.com/yWzRaBsjSS

Pakistan's hill town of Murree declared calamity hit following the death of at least 16 people after heavy snow trapped them in their vehicles as tens of thousands of visitors thronged the city pic.twitter.com/C7QOr5CDjv