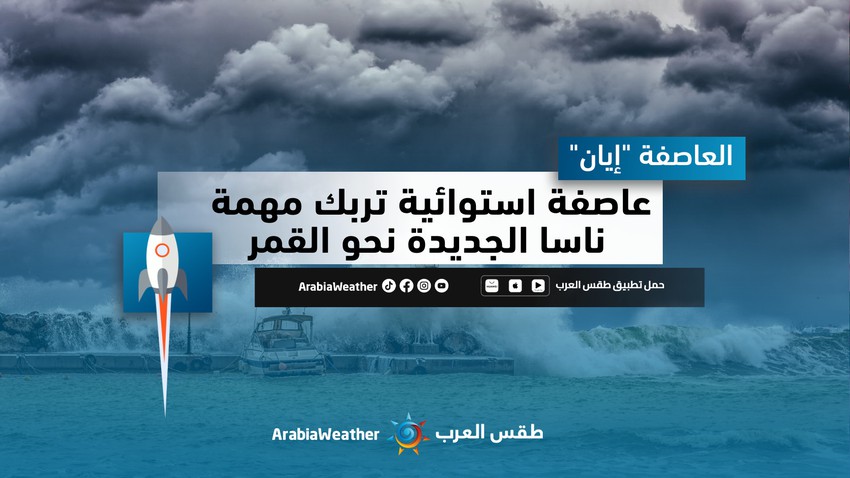 Arab Weather - For the third time in less than a month, the American space agency "NASA" postponed the launch of its new mission to the moon, which was scheduled for this week, due to a tropical storm that is expected to turn into a massive hurricane.

Hydrogen fuel leaks and other technical problems caused the two previous postponements of the experimental "Artemis 1" flight, which is intended to orbit the moon, to test the new "SLS" rocket, as well as the unmanned "Orion" capsule on its head, in preparation for manned flights to the moon. future.

Tropical Storm Ian, currently circulating in the Caribbean, is expected to turn into a hurricane by Monday, and hit the Florida Gulf Coast by Thursday. However, the entire state is at the center of the hurricane as the likely path of the storm's center appears, including NASA's Kennedy Space Center.

So, on Saturday, NASA decided to abandon the planned launch attempt on Tuesday. Instead, the agency is preparing the 98-meter missile for a possible return to its hangar.

If the rocket remains on the platform, NASA may attempt to launch it on October 2, the last chance before a two-week layoff.

On the launch pad, the SLS can withstand winds of up to 137 kilometers per hour. But if the missile must be removed from the platform, it will not be launched in the specified period, which may extend until October 4, and the rocket take-off period will have to be extended to between October 17 and 31, and the delay may extend to next November.

It is noteworthy that the rocket is the most powerful among the rockets ever made by NASA. Assuming that its first test flight went well, the astronauts will board a next mission, "Artemis 2" in 2024, and then land on the surface of the moon in the "Artemis 3" mission in 2025, at the earliest, and it will be the first human landing on Moon since the Apollo 17 mission in 1972.

You may also be interested in: How does the moon affect life on Earth?